IQ tests are one of the most well-known intelligence measurement tests today. It is designed to test the intellectual abilities of individuals and measures several cognitive abilities.

Most tests are standardized and measure an individual's score against others in their age group.

May people take IQ tests for fun; however, they can also have several practical uses.

What Is an IQ?

IQ stands for Intelligence Quotient and is the notion that intelligence can be measured and quantified through problems, tasks, questions and puzzles.

An Intelligent Quotient (IQ) score is derived from several standardized tests, making it the IQ test.

An IQ test aims to measure an individual's potential and intellectual abilities through an assessment that measures cognitive abilities.

Many IQ tests are standardized, and scores are tallied by measuring an individual performance against the norms in that age group.

The term IQ was first coined by psychologist William Stern for the German saying intelligenzquotient. It was his term for scoring intelligence tests at the University of Breslau.

It was arrived at by dividing the person's mental age score, through an intelligence test, by the person's chronological age. The fraction is then multiplied by 100 to reach the IQ score.

The median raw score of the norm sample is set at 100, and each standard deviation up or down moves the score 15 IQ points.

Intelligence scores can only be an estimate and do not have a concrete measure like weight.

Why Do We Test IQ?

Later, in the 1950s, David Wechsler used IQ tests on children and adults.

While the tests have undergone some changes, IQ tests are still frequently used to test an individual's mental abilities.

Most IQ tests look at math skills, spatial perception, memory, language abilities, and problem-solving abilities. These skills can be important in many areas of life.

IQ tests could be used for:

Your IQ score can have an impact on how your view yourself and how you perform. A child may be well-performing in school but may slow down upon receiving a low score.

Similarly, an underperforming worker may be energized to work harder upon receiving a higher score than anticipated.

IQ tests are primarily used to examine learning difficulties in children; however, they can also be used to identify those who could require extra help or are ahead of the game.

IQ tests can also be used to look for correlations between IQ scores and academic achievement, race, genetics and socioeconomic status.

Universal screening of students for learning disabilities or being gifted can help identify children who may have otherwise been passed over for testing.

Using IQ tests on all students rather than relying on teacher selection can end up including more children.

IQ scores can be broken down as the following (taken from the Wechsler IQ series):

Many factors can both influence an IQ score and cause it to change over time. These include:

Higher IQ scores are associated with those who have more education, good health and a stable environment. The reverse can be said for those with lower IQ scores.

However, IQ scores are only one measure of intelligence and not necessarily a predictor of life success.

IQ testing has been controversial throughout history for several reasons.

There is a question of how reliable IQ tests are if the results are not consistent and individuals are not scoring roughly the same score each time.

IQ tests have been used to discriminate against minority groups and disabled individuals.

The standard definition of intelligence is not agreeable to all experts, and not all IQ tests measure the same things.

It can be a good idea to test your own IQ to know where you rank.

It can help you understand your strengths and weaknesses and could result in a change in study or career based on a hidden strength.

It can also be daunting to have your intelligence shown as little more than a number when numerous other factors determine what makes a person smart.

If you do decide to take an IQ test or have taken one and want to improve your score, there are some steps you can take.

Read – Reading a lot never hurt anyone. Those who do read an abundance can have a larger vocabulary as well as stronger visualization skills

Practice – Like most things practice can help. There are many practice tests you can find online that can help you with question format, content and the time limit on the test

Train your memory – Studying will be easier if you have a better memory. There are many training games online that can help with this

What Are the Different Types of IQ Tests

Different tests are used for different reasons. Some are used more for children, while others may be used for employment reasons. 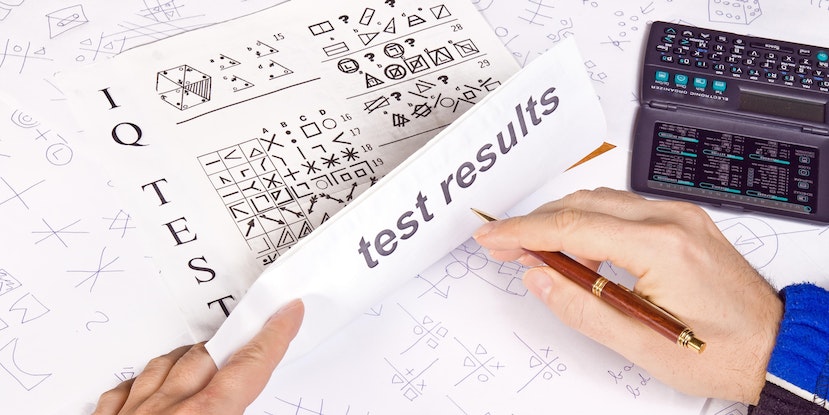 One of the most common IQ tests is the Stanford-Binet Intelligence Test. It is mainly used on children and measures five cognitive ability factors:

First developed in 1916 by Lewis Terman at Stanford University, the test has been revised several times and is now used by psychologists and others.

The test can last between 45 minutes and three hours, depending on the person taking the test. Older children may be given more subtests which can increase their test-taking time.

Scoring is based on the five factors of the cognitive scale and the age of the test taker.

Developed in 1977, the Woodcock-Johnson test is a well-known IQ test given to individuals as young as two years old and as old as in their 90s.

The test was updated in 2014 and is used to diagnose educational issues in children and to measure cognitive functions such as:

The multiple-choice test is given by testing centers, psychologists and schools. It has several scores and is compared with people in the same age group, proficiency scores and levels of development.

Developed by Dr David Wechsler in 1939, The Wechsler IQ test looks at adults' cognitive performance and intelligence. It also looks at intellectual disabilities in adults and iteration in children.

In adults, the test monitors:

Scores can range from zero to 160.

The multiple-choice test can be taken by children and adults and considers the following objectives:

There is no time limit for the test, and users receive a single score rather than multiple scores based on subtests.

The test is made up of 60 questions and is usually given by educational professionals and psychologists.

The Peabody Individual Achievement Test can be used on children and adults ages five to 22 and looks at measuring pronunciation, word recognition and reading.

The test is used to:

It is primarily administered by learning professionals, counselors and clinical psychologists.

IQ tests have been around for a long time and have had many uses. While many people take the tests for fun, they have some practical uses too.

They can help educators identify students who are in need of extra help or who may be working ahead of the curve.

For adults, the tests can help identify areas of weakness and strength and could result in a change in studies or career.

While an IQ test can be a great way to try and measure intelligence, it is not the only way. It may not show everything the individual is capable of.

As with any test, prepare as best you can, remain calm and do the best job you can.