What Is the Canadian Cognitive Ability Test?

The Canadian Cognitive Ability Test (CCAT – not to be confused with the Criteria Cognitive Aptitude Test) is a test which is used to assess the academic strengths and weaknesses of children at all stages of their education in Canada.

The tests will vary for each grade. It is similar to the Cognitive Abilities Test (CogAT) which is found in the US.

This article focuses specifically on the test used for children in the third grade (the CCAT grade 3 test).

The grade 3 test will look and feel similar to the CCAT tests undertaken in other years, with the same three sections:

The test may be administered in one go or separately depending on the school’s policies.

One of the main differences between the grade 3 tests and those taken by younger children is that pupils will need to read and understand the questions for themselves – they are no longer read aloud.

Picture questions that feature in the tests for younger children are also replaced with words from the grade 3 assessments onwards.

What Are the Sections of the CCAT Grade 3 Assessment?

The CCAT Grade 3 sections – verbal, non-verbal and quantitative – are known as batteries, with three subsections each.

There are 170 questions in total across the three batteries.

The verbal battery will usually take around 30 minutes to complete. It is broken into three further sub-sections:

All of the questions are multiple-choice.

This is often considered to be the most difficult section of the test.

Pupils are asked to complete a sentence by understanding how they go together.

Students are shown a sentence with a word missing. They must then find the correct word to fill in the gap and complete the sentence.

Mum put the dinner in the oven for an extra five minutes as it wasn’t quite...

Students are presented with a series of words that are in some way linked. The aim of the task is to identify how the words in each group are connected.

Students need to select the correct answer from a series of options.

What group do all these words belong to? 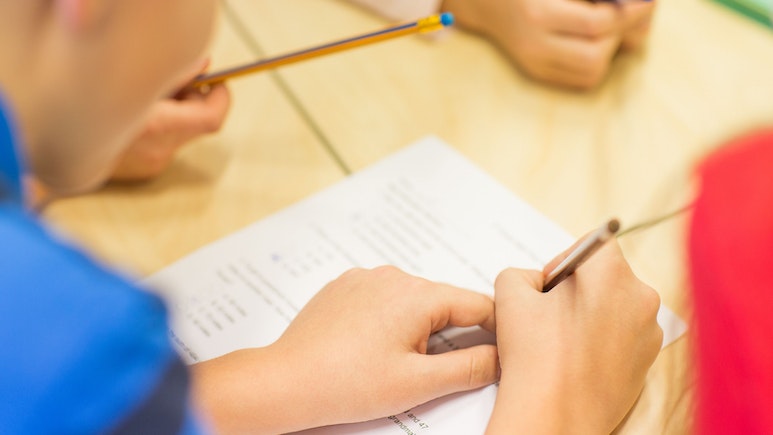 The aim of the non-verbal section of the test is to assess students' reasoning and problem-solving skills without the use of words.

For this reason, this section consists of pictures and diagrams.

This section of the assessment will usually take pupils around 30 minutes to complete, and consists of the following three sections:

The quantitative section of the CCAT looks at how well pupils are able to use mathematical concepts to help them solve problems and reason their answers.

This section will typically take around 30 minutes to complete, with the questions being split into three sections:

For this section of the test, pupils will see four boxes, three of which will have numbers in them. The idea is to work out how the top two numbers are connected and then use this deduction to fill in the blank fourth box.

Students are shown a series of numbers linked by a pattern. They then must choose from a selection of options which number should be next in the pattern according to the series.

Which number comes next in the series?

Pupils will need to balance simple equations so that both sides are equal. They will be given a series of possible options and need to choose the correct answer from the numbers suggested.

What option will make both sides of this equation equal?

If you want 12 month access to all the practice resources for this test, our partner TestPrep-Online.com offers a Family Membership.

How Are Scores for the CCAT Grade 3 Calculated?

Scores for the CCAT will usually be made available shortly after completing the test.

The results are split into three different scores, which are a composite of the results of all three batteries of assessments.

The three scores are:

Students are also given their raw scores alongside a breakdown of sub-scores for each section of the test.

While this assessment is designed to test a child’s abilities, there are some things that can be done to help pupils become familiar with the layout and style of questioning.

This can help them to feel more relaxed and able to perform at their best on the day.

It may help to create a study plan with designated blocks of time set aside for practice papers and revision.

Some children find that this approach helps because they can visually see how much time will need to be spent practicing, while also being able to see that they still have time to do things that they enjoy.

Parents often find this approach useful as it gives them a way to structure their time effectively.

Not all methods of revision will work for every single person, children and adults alike.

Finding the way that your child learns best is key to ensuring that they are able to learn to the best of their ability.

Some children may absorb information better by using visual learning techniques, while others learn faster by using note cards or recorded information.

Having a personalized approach can also help when trying to identify any areas of weakness – you can spot topics requiring extra input, then focus on these in a way that your child finds easy to understand.

Practice questions are an ideal way of familiarizing a child with the assessment and are an especially good idea for pupils who are unsure of what to expect.

They are also a good way of practicing the timings and other elements of the CCAT process.

There are many websites that offer free practice questions as well as practice papers which are available to purchase, such as this one on word meanings or this one on numbers’ logic.

It is important to practice a variety of question styles and formats so that the child can be fully prepared ahead of the CCAT.

This way, no matter what style of question they come across, they will know what is expected and how to answer.

Step 5. Make Sure Your Child Gets Enough Rest Beforehand

Having enough sleep – being well-rested – is key to ensuring that stress levels are as low as possible ahead of the CCAT.

Ideally, grade 3 children should have 9 to 12 hours sleep a night.

It has been well documented that children who get enough rest before an exam will generally perform better as they tend to have a better ability to recall facts and information.

A healthy meal will not only help to avoid any distractions from hunger, but may also help to improve overall performance.

It is thought that protein-rich foods are particularly good as they can help to improve concentration and mental clarity, as do leafy vegetables, berries and nuts.

Good breakfast choices ahead of the CCAT assessments would include eggs, porridge or natural yogurt with a selection of fresh fruit and berries.

If your child is particularly nervous, consider practicing some calming techniques ahead of the assessments.

Simple breathing exercises can be useful when sitting an exam as they give the student an opportunity to stop, relax and process things before answering any questions.

Calming music, mindfulness and simple meditation practices can also help to ensure that children get enough rest ahead of tests.

Step 8. Talk About Anything Which Is Making the Child Feel Particularly Worried

Sometimes the best thing that can be done to help a child who is worried about a test is to let them know that they are heard.

Taking the time to talk through any worries and listen to concerns can help to put their mind at ease.

This can be useful in overcoming any anxieties that they may have.

Step 9. Remember to Have Fun

While practice papers and tests are an important way of familiarising and preparing a child for upcoming assessments, it is also important to not put too much pressure on them.

Many parents find that having a designated ‘revision free’ time ahead of tests will help to relax their children and reduce overall stress levels.

This means that children go into the tests feeling more relaxed and are generally able to cope better under pressure.

Revision free time ideas can include a movie night with popcorn and snacks, a family walk in the park or countryside, or a games night.

As a parent, carer or teacher, it can be difficult to watch children undergoing tests, especially if you know that they tend to be anxious about them.

The most important thing to do is maintain open communication about any worries or anxieties that they may have.

Completing practice questions may help to build confidence and avoid too much unnecessary stress, as children will be able to gain some knowledge of what to expect.