What Is a CAT4 Test?

The CAT4 (Cognitive Abilities Test) is used by 50% of secondary schools in the UK and Ireland, and many primary schools.

The schools use the CAT4 test to understand the abilities of students aged from six to 17 years old, so that teachers can support them and help them develop.

It can also help to group children together depending on their learning preference, identify areas for improvement and allow teachers to encourage students to reach their full potential.

The CAT4 is a diagnostic test to give a broad view of how individuals learn and highlight general strengths and weaknesses.

These tests can seem overwhelming to a child; however, reminding them that this test will help their school support them should be reassuring.

There is an opportunity to practice and prepare for the CAT4 tests, which also helps prevent them from becoming overwhelming.

The CAT4 test can be taken at different times and ages in the student’s life. It is separated into levels depending on the child’s age and school year.

The level increases in difficulty as the age increases.

Levels X to C are generally used to indicate a child’s learning types and progress.

Level D and beyond give a firmer indication of their solid subjects and ones they struggle with.

It can help the pupil think about future career paths too.

For example, children taking the test at six years old may be tested to see if they learn the alphabet phonetically or not.

In a slightly older child, the CAT4 test may show they learn better using graphs and charts instead of written explanations.

A child taking their Key Stage 2 SATS may also take a CAT4 test.

The results of all tests are then combined to assess the pupil’s level at that time and could help indicate which GCSEs would be better to study.

This test is used for children aged between 7.5 and 10 years old and is usually administered in Year 4 in England, or Primary 5 in Scotland.

There are four types of questions, separated into three parts in this assessment, and each part needs to be completed before moving on to the next. Question types are the same throughout levels A-G.

Part One is 20 minutes long and consists of figure classification and figure matrices, with 24 questions to be answered in 10 minutes for each.

Part Two is 26 minutes long, in three sections: verbal classification and verbal analogies, with 24 questions in 8 minutes each, and then number analogies which have 18 questions that need to be answered in 10 minutes.

The Level B CAT4 test is aimed at students in Year 5, which covers students that are aged 8.5 to 11.

As with the other tests in the CAT4 battery (Levels A to G), the Level B test consists of four parts, each with two subsections.

The second part consists of three distinct types of questions. The first two are based on verbal questions, 24 questions on verbal classification and 24 on verbal analogies, with eight minutes spent on each. The last subsection in this part of the test is number analogies, which has 18 questions to be answered in 10 minutes.

The CAT4 Level C test is designed for students in Year 6 (or Primary 7 in Scotland), making it suitable for use in testing children aged between 9.5 and 12.

As with the Level A to G tests in the CAT4, the assessment consists of four different question types – spatial reasoning, verbal reasoning, non-verbal reasoning and quantitative reasoning. Each of these question areas is broken into two subsections.

The test itself is delivered in three parts.

The first part consists of the non-verbal reasoning questions, with 48 questions and a 20-minute time limit split equally between figure classification and figure matrices.

For children in Year 7 (or Secondary 1 in Scotland), the Level D CAT4 is used. With the same structure as tests for Level A-G, there are four types of questions separated into three parts, with each part taking between 20 and 26 minutes to complete. As the levels progress, the difficulty increases to match the age of the child taking the assessment.

Part One has figure classification and figure matrices, with 48 questions in total and taking 20 minutes to complete.

In Part Two, there are three types of question – verbal classification and verbal analogies, both with 24 questions that need to be answered in eight minutes. This is followed by number analogies, which has 18 questions and a 10-minute time limit.

Aimed at students aged between 11.5 and 14, the CAT4 Level E is usually administered in Year 8 (Secondary 2 in Scotland).

Part One has a 20-minute time limit and 48 questions, spilt equally between figure classification and figure matrices.

Part Two covers both verbal reasoning and part of the quantitative reasoning questions, with 24 questions in eight minutes each for verbal classification and verbal analogies, and then 10 minutes to answer 18 questions on number analogies.

Part Three is the second half of quantitative reasoning questions (18 questions in eight minutes on number series) and the spatial ability battery, which consists of figure analysis and figure recognition, both having 18 questions that need to be answered in nine minutes.

For students in Year 9 and Year 10, or Secondary 3 and 4 in Scotland, the Level F CAT4 test is used as a standard admission tool for gifted programs or exclusive schools.

In the Level F test, students aged between 12 and 15 are faced with a three-part test following the same structure as the other tests (Level A to G).

The first part is figure classification and figure matrices, each with 24 questions to be answered in 10 minutes.

For students in Year 11+ or Secondary 5+6 in Scotland, the Level G assessment is designed to challenge students as they prepare or leave the secondary education system and choose their further education focus.

Like the earlier tests, the assessment is split into three distinct parts and lasts a total of 78 minutes, although breaks can be taken between parts. Part One consists of non-verbal reasoning questions, with figure classification and figure matrices, with a total time of 20 minutes and 48 questions.

Part Two has three types of question. The first two are related to verbal reasoning, with verbal classification and verbal analogies having 24 questions each to be answered in a total of 16 minutes. The last section is number analogies, and students have 10 minutes to answer 18 questions.

Part Three begins with 18 number series questions to be answered in eight minutes, and then two sets of questions on spatial ability (figure analysis and figure recognition), lasting 18 minutes in total with 36 questions split equally in that time.

What Are the Sections in the CAT4 Assessment?

The CAT4 comes in three sections

Each part has multiple-choice questions.

The sections, which each have subsections, must be answered within 45 minutes, meaning the total time for the CAT4 is 2 hours and 15 minutes.

Students who have dyslexia or special learning needs may have extra time to answer.

These sections are formatted into three different parts, with each of the four main areas being broken down into smaller sections.

If you want 12 month access to all the practice resources for this test, our partner TestPrep-Online.com offers a Family Membership.

The student is shown three shapes or figures to look at and must work out how they are connected. 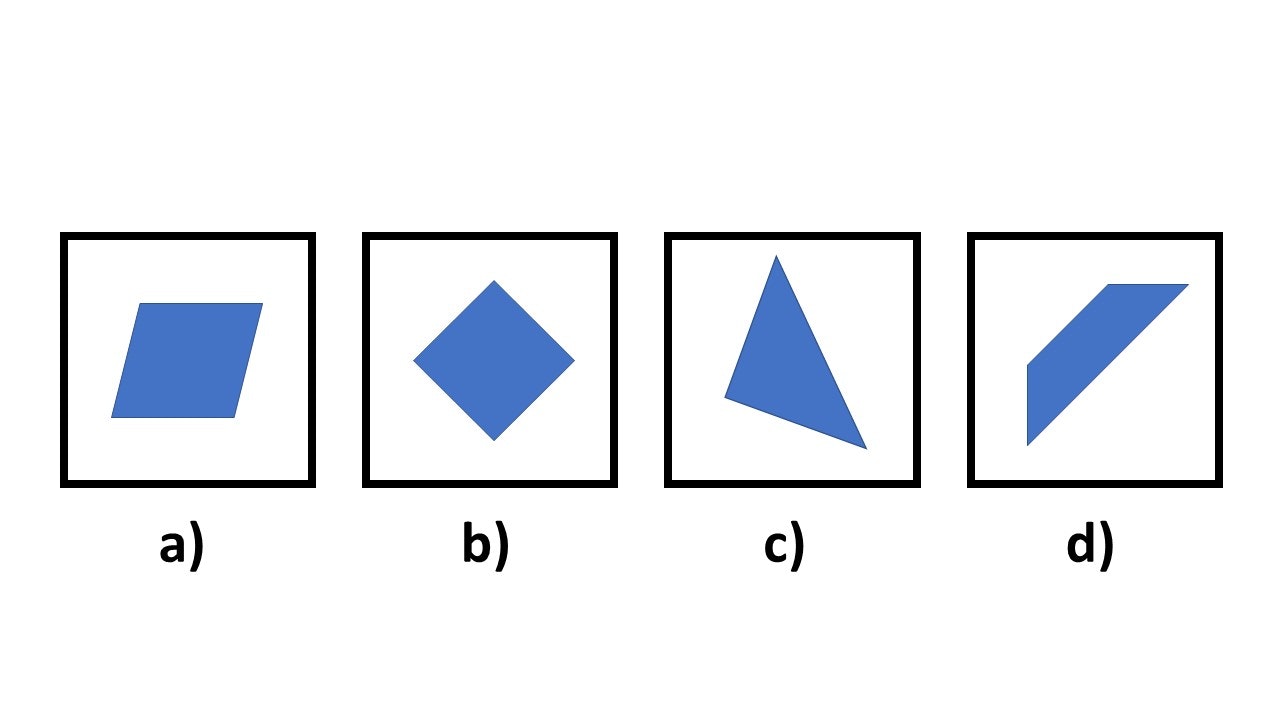 Look at these four shapes – one of them is different to the other three in some way, please choose which one it is.

The student must identify which shape is missing. It should make logical sense. 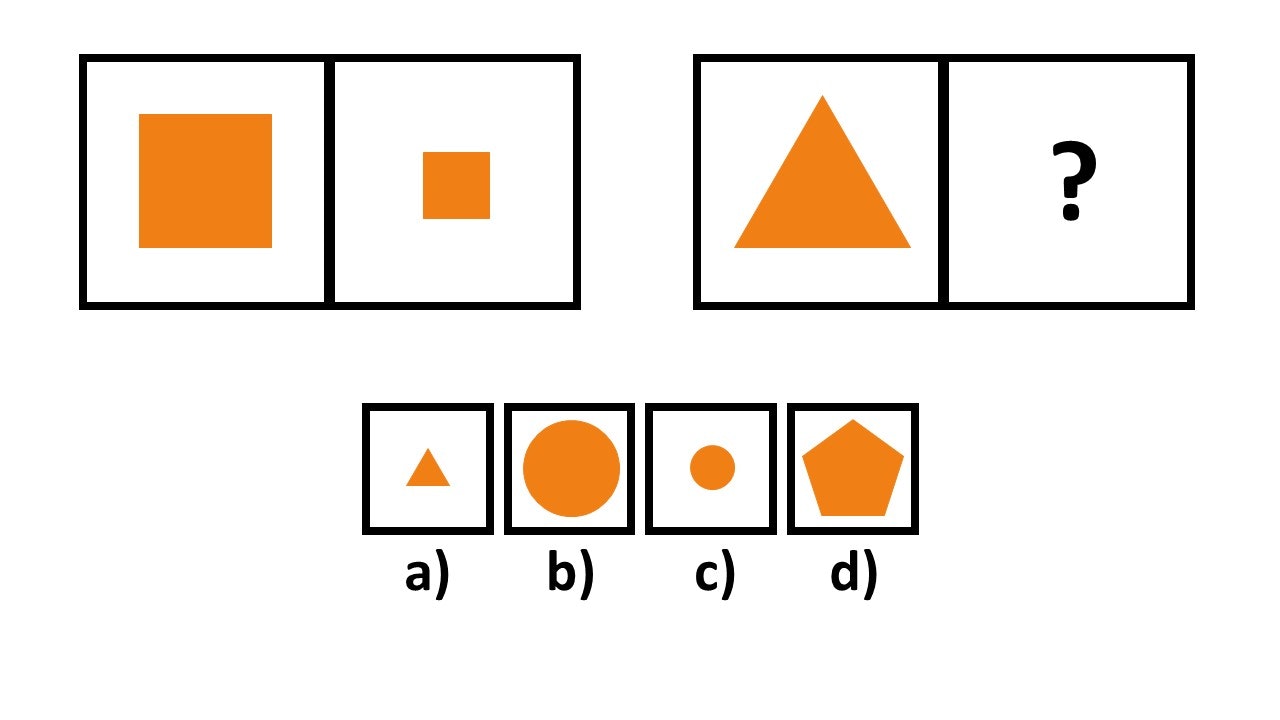 Which shape goes next in the box? 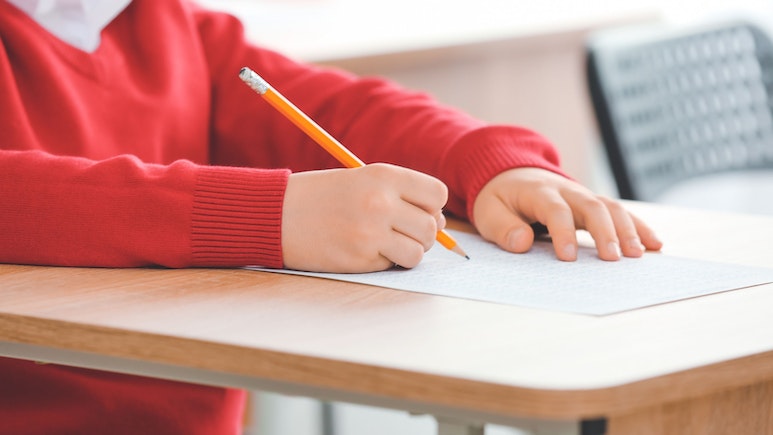 In this section, the student needs to identify the pattern in words.

Which word fits the pattern of the words above?

Three words are connected somehow, and the student needs to identify which word is the connection.

Which word connects the three words?

The pupil is shown two pairs of linked numbers and then a single number with its pair missing. They must guess the missing number.

Which number completes the pattern?

Using the series of numbers given, the student needs to work out the rule of the pattern and determine which number comes next.

Which number comes next?

This section is testing symmetry and shape. The student must work out what a particular shape would look like unfolded and lying down flat. 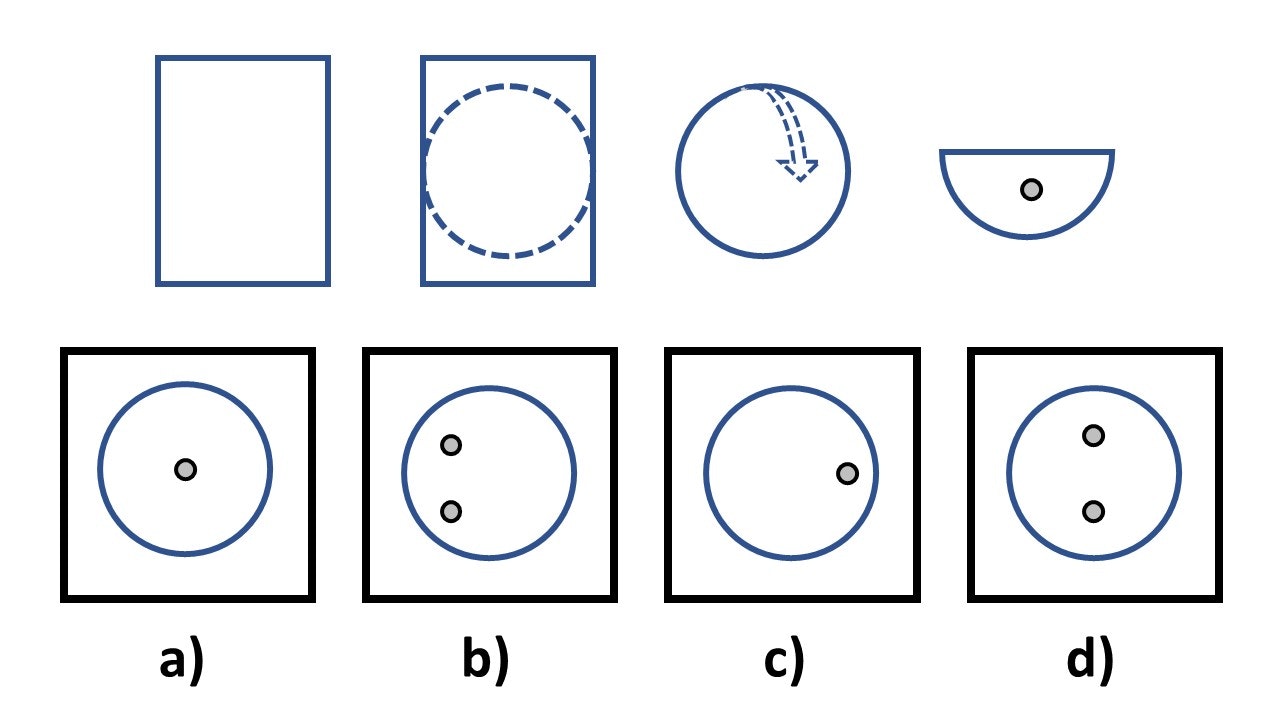 A4 paper is cut into a circle, folded in half, and a hole is punched in the middle. What will the paper look like when it is unfolded?

Which diagram shows the correct answer?

The final section is about recognising hidden shapes. 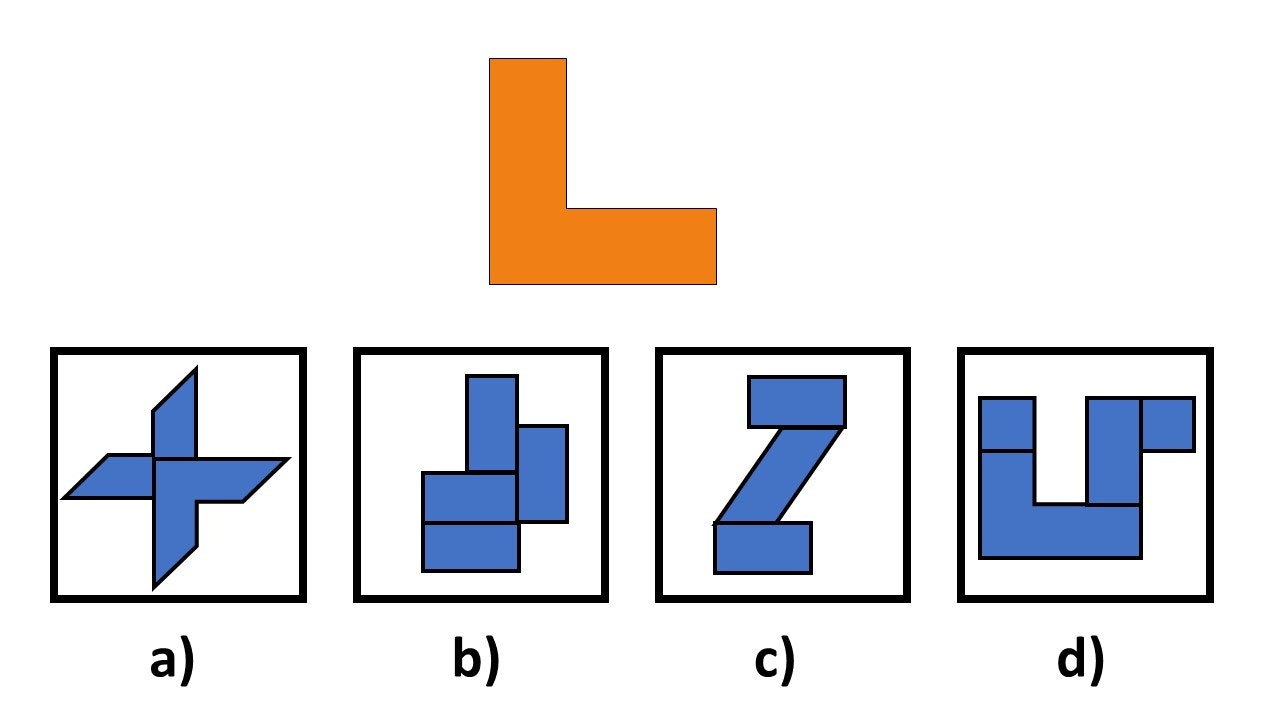 How to Prepare for the CAT4 Tests

CAT4 tests are not like GCSEs or SATs because the pressure is not there to pass with a certain a score to gain a particular qualification.

However, children will naturally want to do well; but they should try not to feel too worried about them.

It is important to tell children to relax and feel confident that they will excel in their strengths, and recognise areas where they need support.

The testmakers do not advise children to do practice papers before taking the test.

Although practice papers are not advised, many online websites and videos show the different sections and what they consist of.

This is the profile of results that are given upon completion of the CAT4 assessment. This will include information relating to how well an individual has scored overall as well as within individual batteries of questions.

This is the section of the CAT4 test that focuses on quantitative questions. These will generally be mathematical.

There are several options to choose from when it comes to practicing for CAT4 tests. One of the most popular service providers is TestPrep Online.

The test is given at every level of education, with each paper tailored to the grade which will be taking it.

This means that the tests are likely to get progressively harder as students progress through education and they may find that some aspects of the assessment are more difficult than others.

As with all assessments, taking the time to prepare can help to ensure that pupils can give their best performance on the day.

Some useful tips include:

There are several websites that offer the opportunity to try practice questions and can be useful for preparing for the CAT4 assessments.

One of the most popular options for those who want to be as prepared as possible is the TestPrep Online website.

There is a CAT4 test for every grade of education from the age of 4 to 17.

This means that whether your child is in Kindergarten or their Senior year, there will be a test paper suited to their age and educational level.

One of the most important things to prepare a child for CAT4 testing is to ensure that they are exposed to a wide variety of text documents.

This can be in the form of fiction books, textbooks, instructions, recipes or anything else which may have words.

The more that they read and familiarise themselves with, the more capable they will be of answering comprehension questions. They will also have a wider vocabulary and a deeper understanding of concepts such as spelling.

CAT4 tests help school children focus on the areas that they may excel in and gain support in areas they are struggling in.

People learn in different ways, and these tests can allow the educational setting to adapt to the pupil’s prefered learning style.

Going over the different types of questions that will come up in the test will help the student feel prepared and more confident.

However, they do not need to revise as such as these tests assess the brain’s response to the questions; therefore, they need to be new and fresh.