Don't miss out on that job. Practice today!
Take a Personality Test!

The NEO Personality Inventory test (NEO-PI) is a psychometric assessment tool widely used by employers as a key part of their recruitment process and increasingly as an on-job assessment tool.

Also known as the Big Five, OCEAN or CANOE, the personality model used by the NEO-PI test measures five aspects of the personality and has versions for adults, adolescents and children.

How Was the NEO-PI Developed?

The development of NEO-PI began in the 1970s with psychologists Paul Costa and Robert McCrae’s investigation into how personality changed with age.

In 1978, they published the original version of the test based on these three personality traits, NEO-PI.

In 1985, they published a manual for the test which included all five traits.

By 1992, Costa and McCrae had developed six facets for each of the five traits, totaling 30 facets in all.

The results of this investigation, and a further testing sample of adolescents, adults and middle school age pupils, led to the development of the NEO-PI-3.

Published in 2005, NEO-PI-3 is accompanied by a glossary of terms to make the test easier for candidates to understand.

This glossary and improvements made to the test mean that NEO-PI-3 is suitable for not only adults but also young people and individuals with disabilities.

While developing NEO-PI-3, Costa and McCrae also created a short version of NEO-PI-R, which they called NEO-FFI (Five-Factor Inventory) and is now known as the NEO-FFI-R.

Subsequent independent investigations by McCrae and other psychologists have generally agreed that the five-factor model works across all cultures, even where English is not their first language.

More history about the development of personality testing can be found here.

As part of the recruitment process, you will generally face the NEO-PI-3 or the NEO-PI-FFI versions of the test.

What Does the Test Measure?

The NEO-PI-3 and NEO-PI-FFI tests assess your personality levels of the following five personality traits:

This personality trait is all about how open you are to experiencing the world around you. Openness is measured on a scale of ‘closed’ at one end to ‘open’ at the other.

A high openness score denotes that you are creative, inventive, happy with abstract concepts and adventurous, but may struggle to maintain focus and be prone to unpredictable behavior.

If you have a low openness score, you may be reliable, perform consistently and be cautious, but dislike change and seem close-minded.

The six facets of openness are:

Conscientiousness describes how dependable, organized and self-disciplined you are. It also looks at how well you can control your impulses. This trait is measured on a scale of ‘spontaneous’ to ‘conscientious’.

If you have a high score, you are well-organized, efficient, detail-minded and hard-working, but you may be perceived as stubborn and inflexible.

A low conscientiousness score indicates that you are easy-going and flexible, but also impulsive, careless and disorganized.

The six facets of conscientiousness are:

This personality trait is linked to how you interact with other people and the extent to which you seek stimulation from others.

Think about whether busy social situations energize you or drain you and if you cope well with time alone. This trait is measured on a scale of ‘introverted’ to ‘extroverted’.

If you score high in extraversion, you are outgoing, energetic, assertive and sociable, but you may also be excitable and attention-seeking.

A low score indicates that you are happy with your own company and are reserved and reflective but may appear withdrawn and need time to recover from social situations.

The six facets of extraversion are:

Agreeableness describes how you tend to behave in relationships with others, how you treat them and if you are compassionate and trusting or aloof and suspicious. This trait is measured on a scale of ‘hostile’ to ‘agreeable’.

A high score indicates that you are co-operative, friendly, caring and are genuinely interested in others, but may act in a submissive way to avoid giving offense and allow others to take advantage of your trust.

If you score low on agreeableness, you are analytical and competitive, but do not trust others easily and may be manipulative.

The six facets of agreeableness are:

This personality trait is all about how well balanced you are emotionally and to what extent you are affected by stress. The scale for this trait runs from ‘stable’ to ‘neurotic’.

A high score for neuroticism denotes that you are sensitive and nervous, a worrier, prone to the effects of stress and subject to mood swings.

If you have a low score, you are calm, secure, deal well with stress and are generally emotionally stable.

The six facets of neuroticism are:

What Is the Format of the Test?

There are two versions of NEO-PI that an employer may use as part of their recruitment process.

The first is the NEO-PI-3, available in a self-report format (Form S) and a test that is administered by an observer (Form R). Both tests consist of 240 questions. NEO-PI-3 generally takes 30 to 45 minutes to complete.

The NEO-PI-FFI is a shortened version, consisting of 60 questions, which you should be able to complete in around 15 minutes.

Both versions are available in paper form or online, and neither are timed.

Each test question is a statement about your behavior which you are asked to score on a range, such as ‘agree’ to ‘disagree’ or ‘like me’ to ‘not like me’. 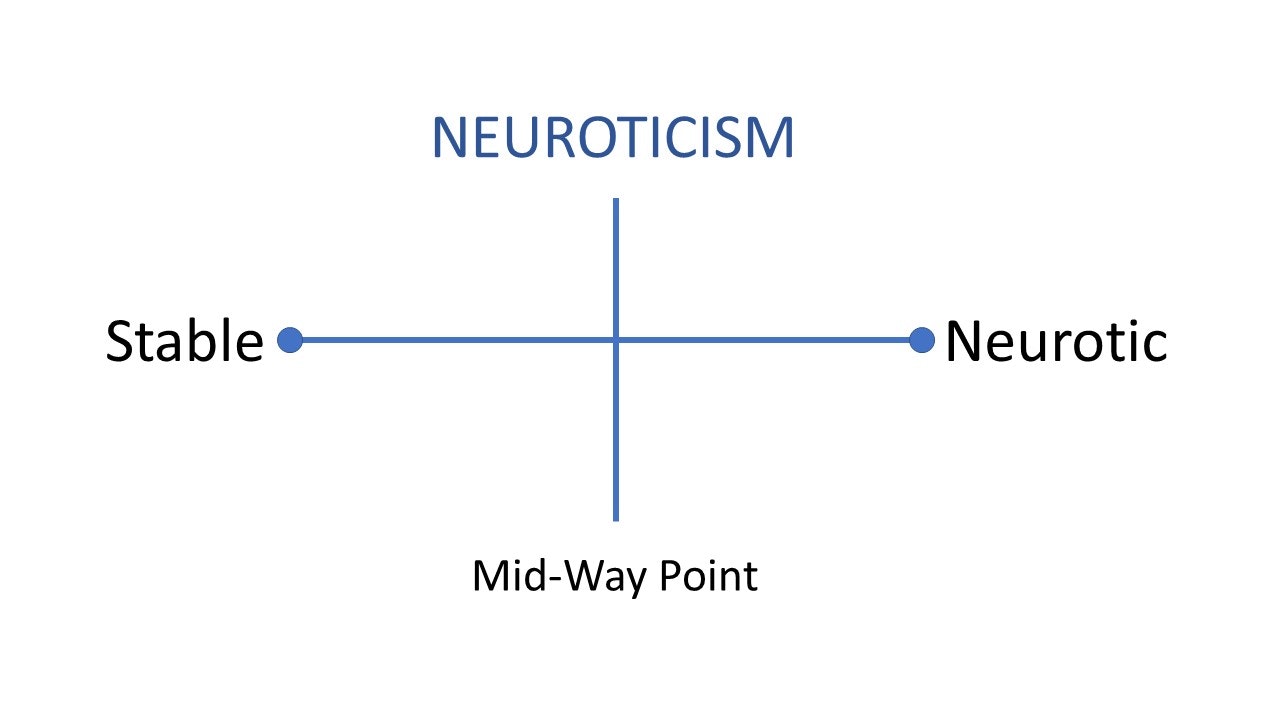 The results of your test are scored on a scale for each factor, rather than as a numerical value. For instance, on the above scale for neuroticism, your score could be neither low nor high, but somewhere nearer the mid-way point.

This would indicate someone creative and open to new ideas, flexible but a little disorganized, an ambivert (balanced between extraversion and introversion), sociable, assertive but not to an extreme, and emotionally stable in comfortable situations.

Using a separate scale for each personality trait allows for a more accurate and individual reading of who you are.

The accuracy of your NEO-PI result, therefore, relies on your honesty in answering the questions.

To guard against deception, employers will often combine Form S and Form R results. Furthermore, a candidate who scores less than 50 or more than 150 agree/strongly agree answers (that is, someone with more than 100 answers in the middle) will be flagged for further investigation.

Answering honestly is the best way possible to receive an accurate result.

Can Your Personality Change?

How your personality as an adolescent differs from your personality in your twenties and later in life was the question that Christopher J Soto and Oliver John sought to answer in their 2012 study.

They found there were some slight variances:

Overall, however, Soto and John concluded that an individual’s Big Five personality traits remained stable throughout their lifetime.

Why do Employers Want Your Personality Information?

The NEO-PI test was designed as a clinical assessment tool but an increasing number of employers use it as a psychometric test to work out whether their candidates are a good fit for both the job and the business’s culture.

Of course, it is the exact mix of your personality trait score that will show how well you suit the role, not simply a single prominent aspect. You may be an extrovert – sociable, energetic, positive – but also score high on the neuroticism scale – emotionally unstable and prone to stress.

Using the NEO-PI test, an employer can build up a complete picture of not only who you are and how well suited you are to the role, but also how you may perform through future developments and under stress.

For instance, a commercial air pilot may have the perfect skill set, experience and personality to do the job in the first instance, but the employer would like to know how well they would react during a hi-jack or malfunction incident.

Increasingly, employers are looking for ways to future-proof their workforce for ongoing productivity and performance.

Unlike an academic exam where you must revise beforehand, preparation is not necessary for the NEO-PI test. There are no right or wrong answers or calculations to remember.

Instead, the NEO-PI test requires honesty and self-awareness when responding to the questions.

If you would like to familiarise yourself with the format of the NEO-PI test, practice papers can be sourced online, for instance, this one from Job Test Prep.

As with a job interview, make sure you are well-rested, hydrated and entering the process with an open mind.

Fully consider each question before you answer. Respond in a way that truly reflects your personality rather than giving an answer that you think would make you more suitable for the job.

Being in a job role that is not suited for your personality can make you miserable.

Overall, enjoy the process and see this as a chance to learn about yourself.

Will the Employer Consider Your Results in Isolation?

These three aspects of the recruitment process will allow them to form a well-rounded impression of your suitability for the role.

Will You Get a Copy of Your Results?

Where you do not automatically receive a copy, you may, of course, ask for your results.

Should you be asked to take the NEO-PI test as part of a recruitment process, the best approach is to see this as an opportunity to learn more about yourself.

An employer who uses psychometric testing to ensure candidates are a good fit is taking an interest in their workforce, now and in the future.

Prepare with sample papers, make sure you are your best on the day, and answer honestly.

Whether you land the job or not, take full advantage of your NEO-PI test results as a self-improvement tool.