What Is the Canadian Cognitive Ability Test Grade 4?

It is an assessment taken by children throughout all stages of their education in Canada, developed by Criteria Corp.

The test will vary from grade to grade, with each test designed specifically for the age group taking it.

The Canadian Cognitive Abilities Test is designed to assess the strengths and weaknesses of each individual child as well as identifying any areas that may need extra input.

This article focuses on the assessment taken by children in the 4th grade.

What Are the Sections of the CCAT Grade 4 Assessment?

The grade 4 CCAT has 176 questions in total. These are split into three sections, known as batteries:

More emphasis is normally put on the non-verbal and quantitative aspects of the test.

Depending on the needs of the school and any time constraints they may face, the batteries may be administered all at once or separately.

As with other CCAT tests, each battery takes approximately 30 minutes to complete with the whole test usually completed in around 90 minutes.

The verbal section of the CCAT focuses on assessing students' language and verbal reasoning skills and will usually take approximately 30 minutes to complete.

It is split into three further sub-categories of questions.

Verbal questions will require that test-takers discover the link between a pair of words.

Using this deduction, the aim is to then find the missing word in a second pairing. This is often considered to be the most difficult section of the assessment.

For example, take a look at this sample question:

Children are shown a sentence with one word missing and are given a series of possible words to fill the gap. They must choose the correct word from the selection to complete the sentence.

For example, take a look at this sample CCAT question:

a) Needed
b) Had
c) Smelled
d) Played

For each verbal classification question, a series of word problems are shown with a selection of options that could be used to describe how the words are connected.

Test-takers must choose the correct option that groups the words together.

The non-verbal section of the CCAT tests students’ spatial reasoning abilities and will usually take approximately 30 minutes to complete.

Students will be presented with a variety of questions from three separate sub-categories:

The Quantitative section of the CCAT offers students a selection of math questions designed to test and assess their numerical reasoning skills.

This section will usually take around 30 minutes to complete.

Students will be shown a selection of different numeracy questions, which fall into three sub-categories:

These are similar to the figure analogies in the non-verbal section, but involving numbers.

Students will be shown two pairs of numbers that are in some way connected. The aim is to correctly identify how the numbers are connected and then fill in the gap for the third set of numbers.

For this set of questions, pupils will be shown a series of numbers with a missing number that needs to be filled in.

The task is to work out how the numbers are linked and then choose the correct option for the missing number.

If you want 12-month access to all the practice resources for this test, our partner TestPrep-Online.com offers a family membership.

Family membership gives you access to all the TestPrep-Online resources for the next 12 months. You will also get two separate accounts, which can be very helpful if you have two children preparing for their tests. 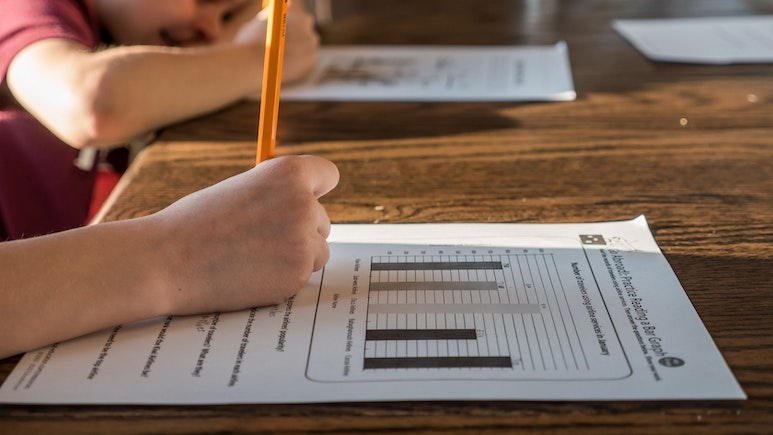 This style of question is presented as an equation with a missing number.

The objective is to complete the equation and make sure that both sides balance.

How Is the CCAT Grade 4 Scored?

Students will usually receive their CCAT scores shortly after completing the CCAT.

The test scores are split into three different sections, which are a composite of all of the results from the three batteries of questions.

The three CCAT scores are:

As well as the three overall scores, students will be given a raw score and a breakdown of their results for each section of the assessments, which is known as a sub-score.

How to Prepare for the Test for CCAT Grade 4 Test

It is true the CCAT looks at assessing core skills that cannot necessarily be trained and revised for, but there are some things that can be done to give students the best chance.

Students should become with the style of question they will find on the paper and take steps to ensure that they are performing to the best of their abilities on the day.

The best way to familiarise a child with the style of questions that they will find during the CCAT is to spend time doing practice questions and sample test papers.

This is also a good way to get children used to the time constraints of the real test and help them to understand what will be expected of them on the day.

The CCAT is designed to test students with a variety of different question formats.

It is, therefore, important to include as many different styles of questions as possible when taking CCAT practice tests and doing your revision.

This will help to make sure that children are comfortable with whatever type of question they come across during the test.

Each child is unique, and as such will have a different approach to revision that works for them.

Finding the techniques that work for your child and using those to build a revision plan will help to increase overall retention and engagement.

Different styles of revision to consider:

Some children find it easier to practice when they have dedicated time for it. Creating a study plan can have the benefit of blocking out set times for practice as well as ensuring that there is plenty of time for other things.

If your child finds that visual revision and learning techniques are helpful, then having a visual timetable thay they can refer to can help to avoid them feeling overwhelmed.

Parents often find that creating a dedicated study plan is helpful as it means that everyday life can be factored in, with revision time included, so that things do not get forgotten or left until the last minute.

Step 5. Make Sure Your Child Gets Enough Rest Ahead of the CCAT

Children ideally need 9 to 12 hours of sleep a night.

Ensuring that your child is well-rested ahead of the CCAT will help to improve concentration, focus and overall well-being.

Tips for getting enough sleep:

Step 6. Eat a Healthy and Nutritious Meal That Morning

A good diet is not just important for physical health, but can also aid focus and concentration.

A diet high in protein and slow-release carbohydrates is thought to be particularly beneficial as this can help to sustain energy.

Berries and citrus fruits are also thought to be beneficial for brain performance ahead of an exam.

For a healthy pre-CCAT grade 4 breakfast, consider fruit juice with porridge or natural yogurt and berries.

If your child is particularly anxious about upcoming assessments, then it may be good to introduce some simple calming techniques that can be used ahead of and during the tests.

Breathing techniques, mindfulness, meditation and doodling can all be effective ways of focusing and calming anxious energy.

Step 8. Talk Through Anything That's Worrying Your Child

If your child struggles with anxiety around tests or generally, it can be really helpful to talk about the things that are worrying them.

By making an effort to sit and discuss any issues, it may be possible to find solutions or introduce other calming and relaxation techniques.

Children also appreciate feeling as though their concerns are valid, so taking the time to listen to them will help to build positive relationships, which will last long into the future.

Step 9. Remember to Have Fun

Spending too much time focusing on the CCAT can result in building anxieties and feelings of being overwhelmed.

Spending some time doing something fun, in addition to time revising, will help to create a balance and can help to show your child that there is more to life than just taking tests.

The CCAT test grade 4 is the Canadian Cognitive Ability Test for children in the 4th grade. It is designed to identify a child’s strengths and weaknesses, as well as areas where they may need additional support.

Test results indicate whether a child is eligible for gifted and talented programs.

The CCAT test grade 4 comprises 176 multiple-choice questions; these are divided into three batteries – verbal, non-verbal and quantitative. Each battery takes around 30 minutes to complete.

CCAT test grade 4 scores are divided into three sections: age percentile rank, grade percentile rank and Staines Rank. Students are also given their raw score for the whole assessment and sub-scores for each of the three test batteries.

The age percentile rank shows how the student performed against other children in their age group.

An age percentile rank of 70 indicates that the student achieved a higher score than 70% of pupils in their age group.

The Staines Rank provides a specific range of scores. A score of 9 is very high and a score of 1 is very low. A pupil with average scores would usually achieve a Staines Rank of 4, 5 or 6.

However, there are a few ways to prepare that will help pupils to have the best chance of success.

Completing practice assessments is a good way to become familiar with the format of the test. It also helps children to learn how to work against the clock and gain a better understanding of time management techniques.

Preparation is key if you want to pass the CCAT test grade 4.

Working through a range of different practice test questions is one of the most effective ways to prepare for the CCAT grade 4 test. This will boost your confidence and help you to feel more relaxed on the day of the test.

In the days leading up to your assessment, make sure that you eat a healthy diet and get plenty of rest.

CCAT test grade 4 results are available shortly after you complete the test.

You will also be shown your raw score, which is the number of questions answered correctly overall, and a sub-score for each of the test batteries. Sub-scores are presented as a percentage relative to other people who have taken the same test. A percentile rank score of 53 would indicate that you scored higher in that section than 53% of pupils who took the CCAT test grade 4.

While there is very little that parents and carers can do while children sit the actual assessments, they can play an important role in preparation.

By encouraging children to talk through their worries, practicing test questions and ensuring that pupils are properly rested ahead of their CCAT grade 4, you will be helping them to feel confident and giving them the ability to achieve their very best scores on the day.