Standardized tests are quite common in schools throughout the world, with some children taking a test more than once a year. While some tests identify areas students need to work on, others can have a more significant impact.

Many tests are used to determine whether a student is suitable for a particular school or program. Therefore, it is important that students understand the type of test they are sitting and how best to do well.

What Is the Grade 1 CCAT?

The Canadian Cognitive Abilities Test (CCAT) is a reasoning assessment that can determine whether a student is eligible for gifted and talented programs.

The test is standardized, group-administered and given in Canada to students in grades kindergarten to 12.

The CCAT can be long, and the three batteries are often given in separate testing sessions.

Each battery runs between 30 and 45 minutes. In total, the CCAT consists of between 118 and 176 questions, depending on which level is being taken.

The test aims at determining a child’s aptitude for learning but is not used to test what a child has learned in school.

The test can identify and consider:

The test looks at three areas of ability:

The test is like the CogAT test (Cognitive Abilities Test) that is given to students in the US.

Like the CAAT, the CogAT test is also divided into three batteries: verbal, nonverbal and quantitative. Each of these batteries has three sub-tests.

The CogAT verbal battery contains audio instruction and images to make it easier for young children.

What Does the Grade 1 CCAT Contain?

The CCAT consists of three batteries and subtests:

The verbal section looks at a student's understanding of the relationship between words and how language is structured.

Students are assessed on their ability to use language for verbal reasoning and oral vocabulary through three types of questions:

Students are given a pair of pictures that hold a relationship. Students are then given another pair with one picture missing.

Students need to understand the relationship between the first pair to figure out what the missing image is.

Below are a set of pictures that have a relationship. There is a third picture and the image next to it is blank. Please select the image that best describes the relationship. 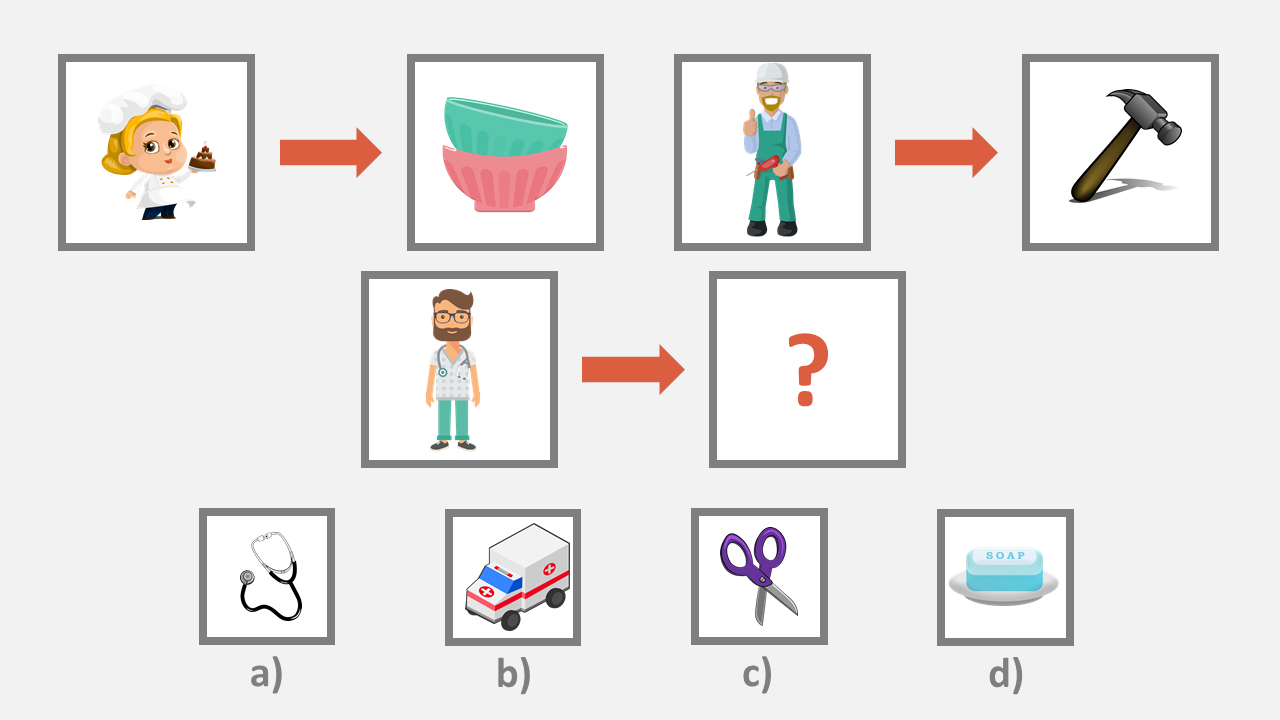 Two sets of relationships are depicted in the images below. Please choose the correct image to complete the third set. 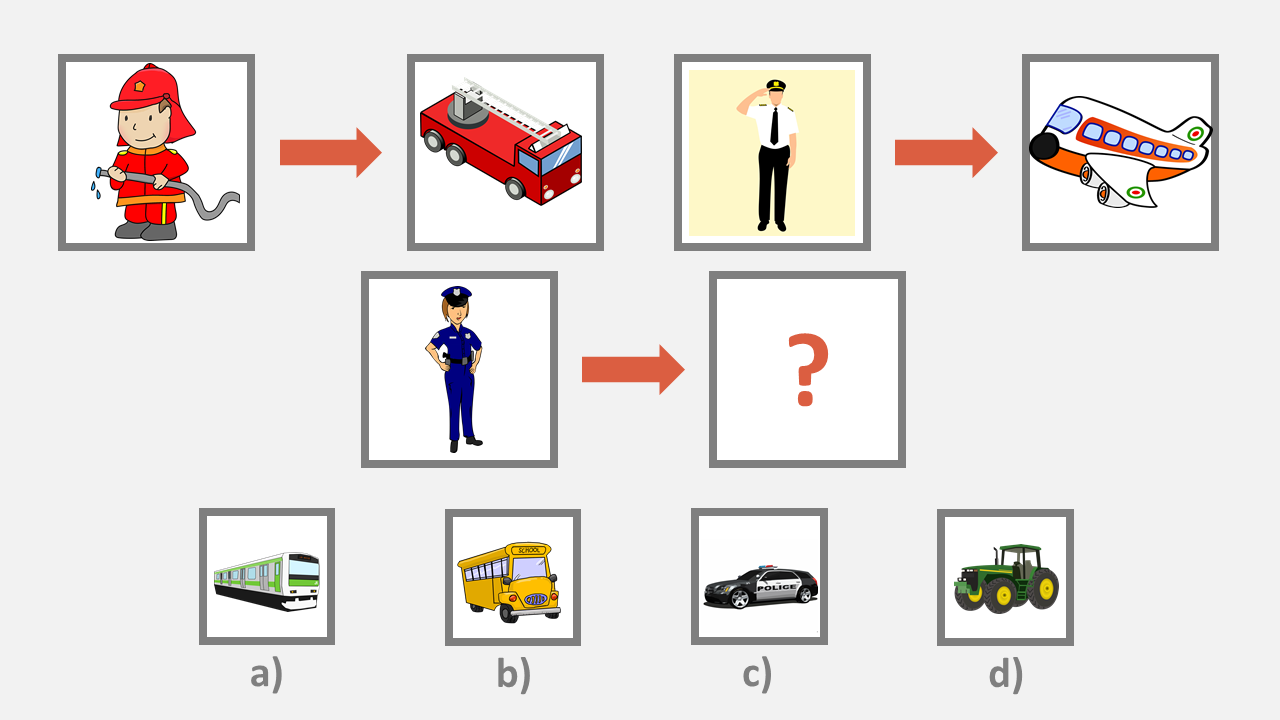 Students need to listen and follow instructions to choose the correct photo out of a set of three.

Point to the bird in the nest. 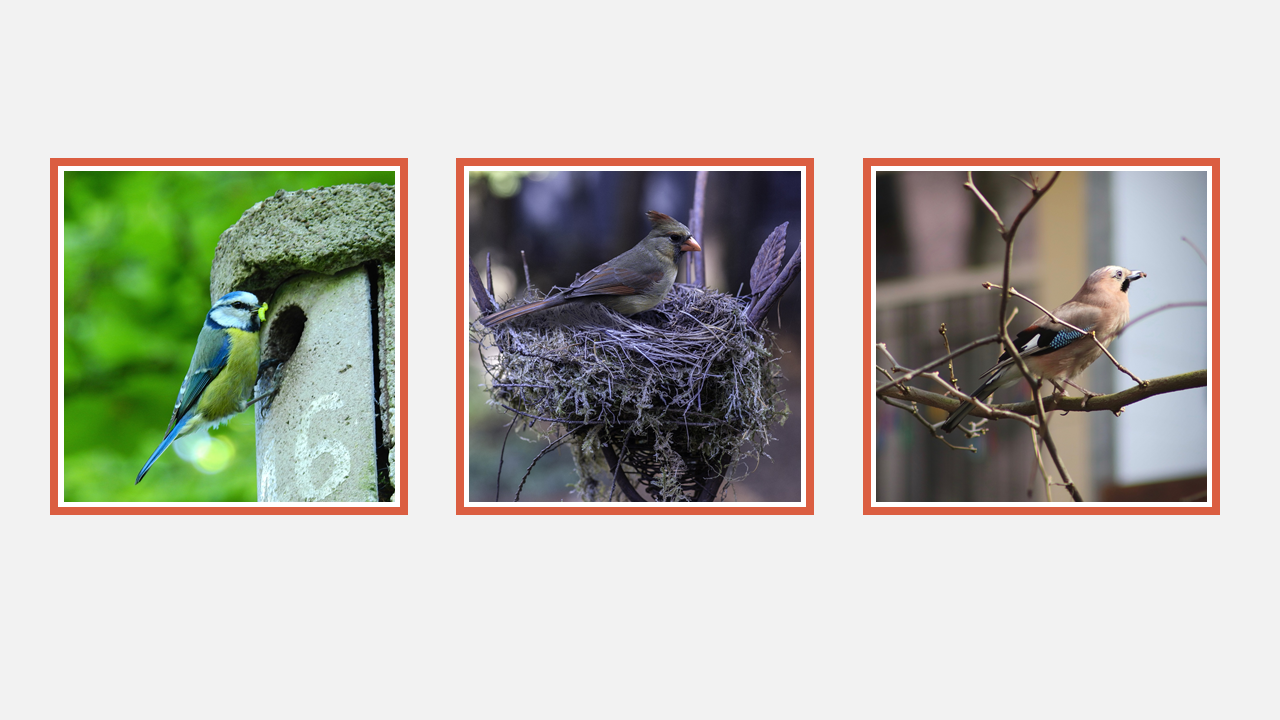 Look for the boy kicking the ball. 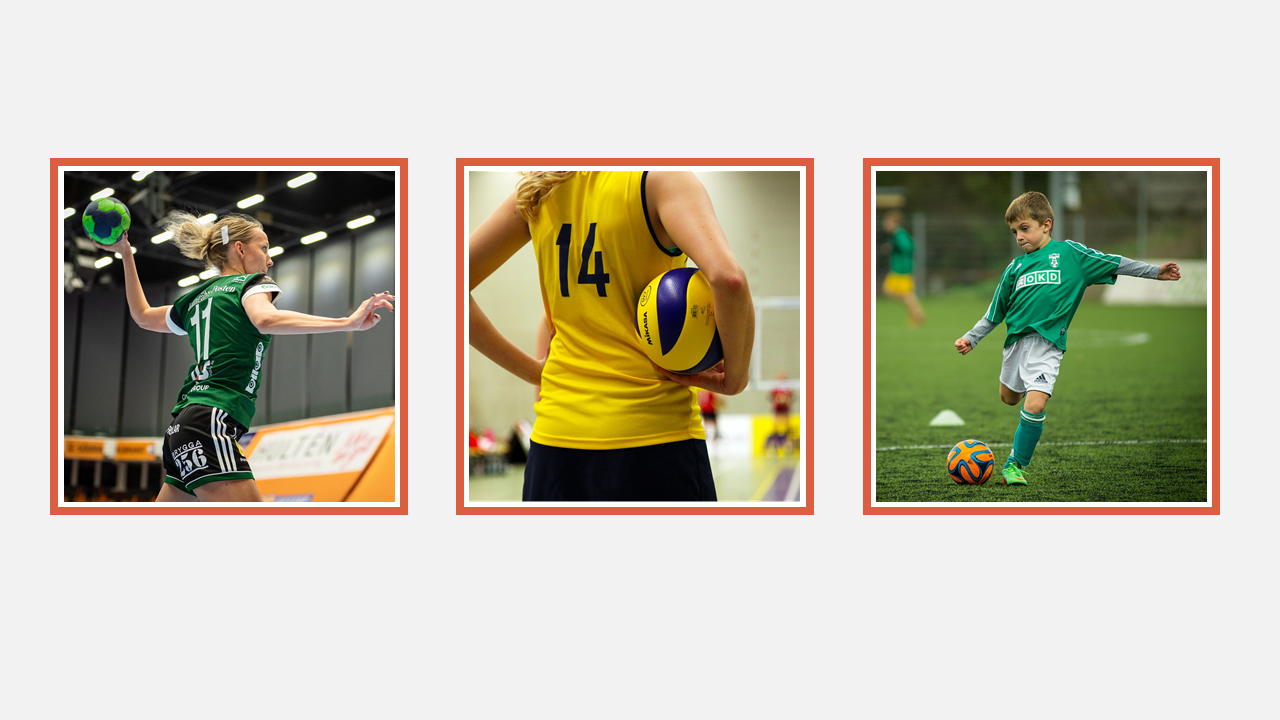 Students are given three pictures that belong to the same group. Students then need to choose another image that will fit into the group.

The importance is understanding which group the images belong to and correctly adding the third image.

Below are three images that belong together for a reason. There are three answer options and only one fits into the group. Please choose the best fit. 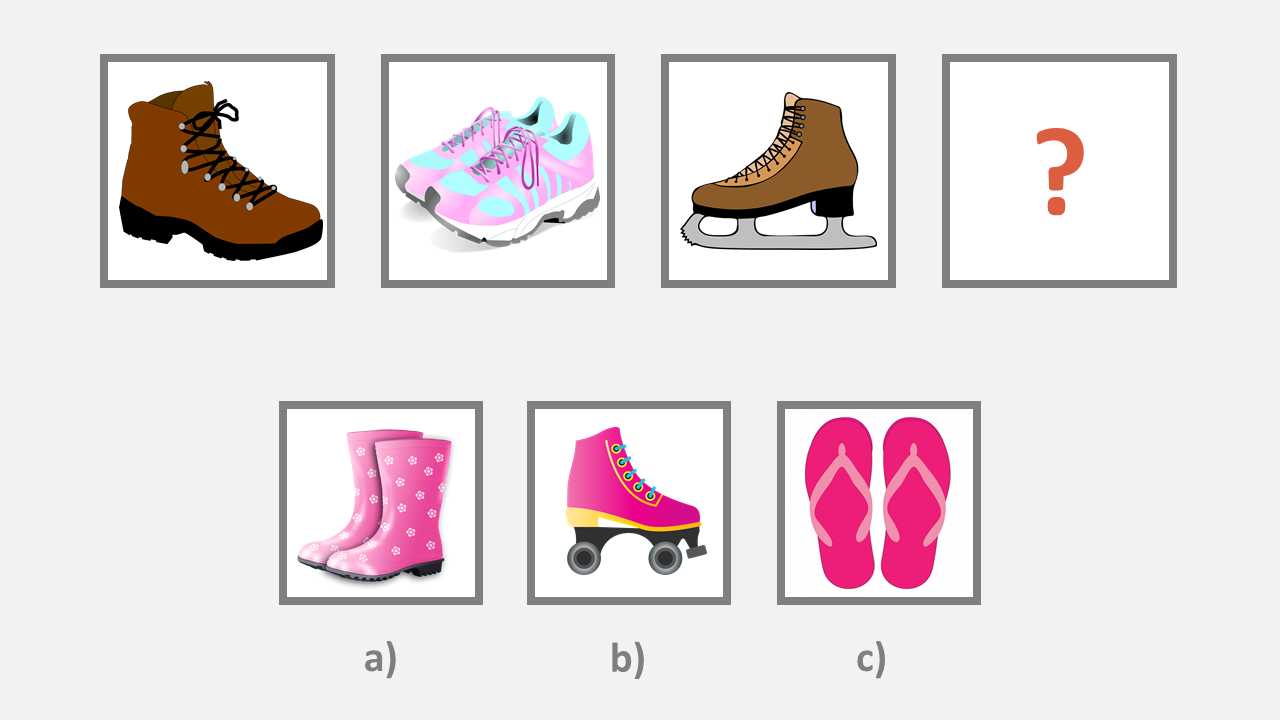 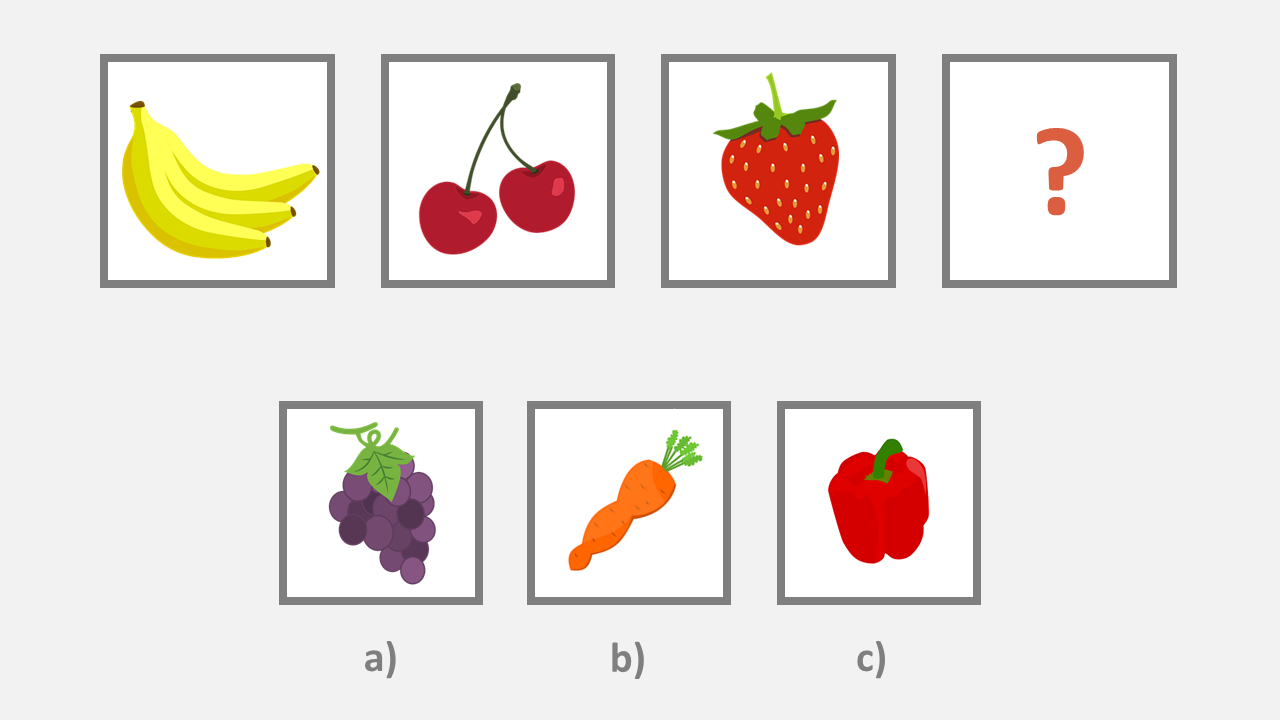 This section measures a student’s ability to both reason and problem solve using numbers and mathematical concepts.

It assesses relational concepts and quantitative concepts with four types of questions.

Students are given a pair of pictures that have a relationship. They are then given another pair with one of the images missing.

Like in the Verbal Battery section, students need to understand the relationship between the images to choose the missing image. 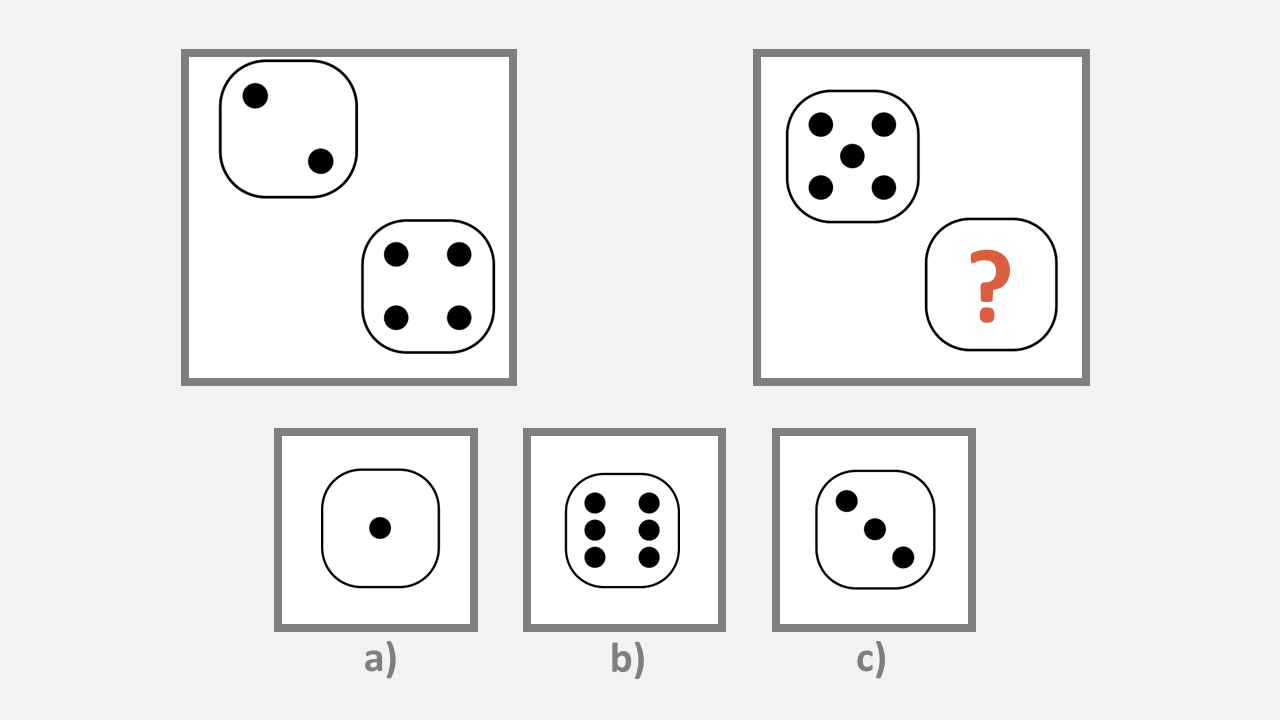 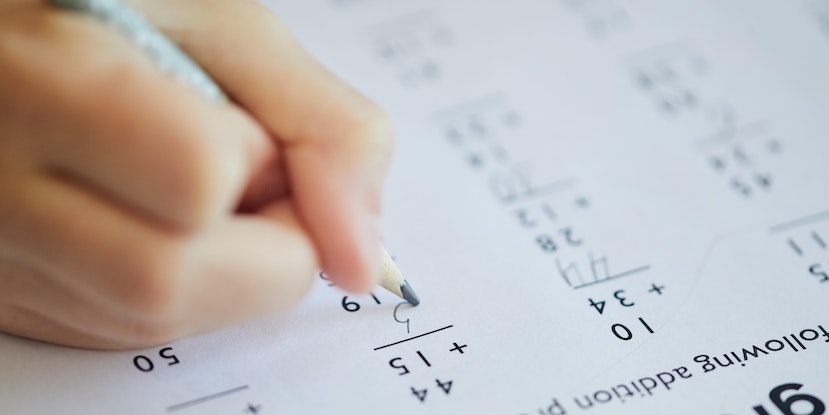 Again, there is a set of images below that show a numerical relationship. Please choose the best image to complete the series. 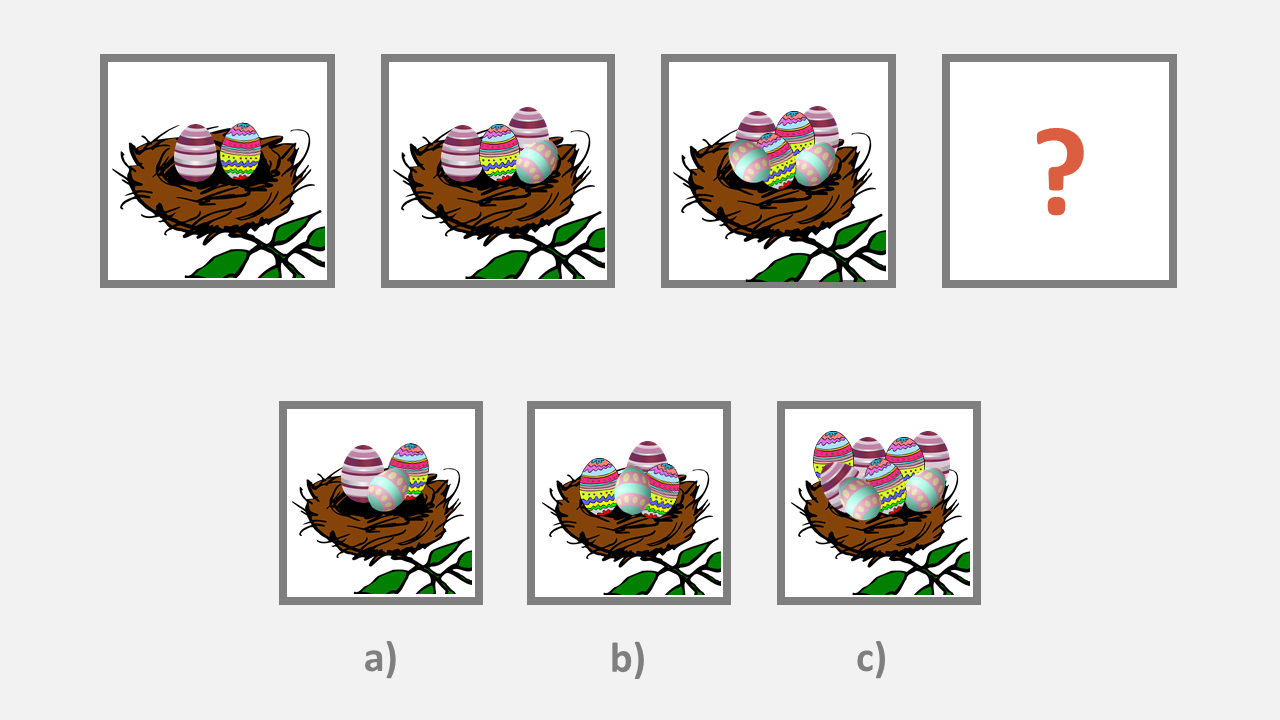 Students are given a set of strings with beads and must determine the pattern of the beads to predict the next string in the series.

You will be handed three strings with beads on them. The first string has two beads, the second four beads and the third string needs to have beads added. How many beads should you add?

You will be again given two strings of beads. The first has three beads, the second has two. How many should the third string have?

Students are given pictures of two trains that carry a number of items. One of the trains has an unidentified compartment.

Students need to determine how many items should be in the compartment for both trains to carry equal items.

These questions assess a student’s ability to reason and problem solve using diagrams and pictures. Students work on figure classification and matrices.

The CCAT 7 test includes a number of subtests that are given to children in varying age groups.

There are three areas of questions: 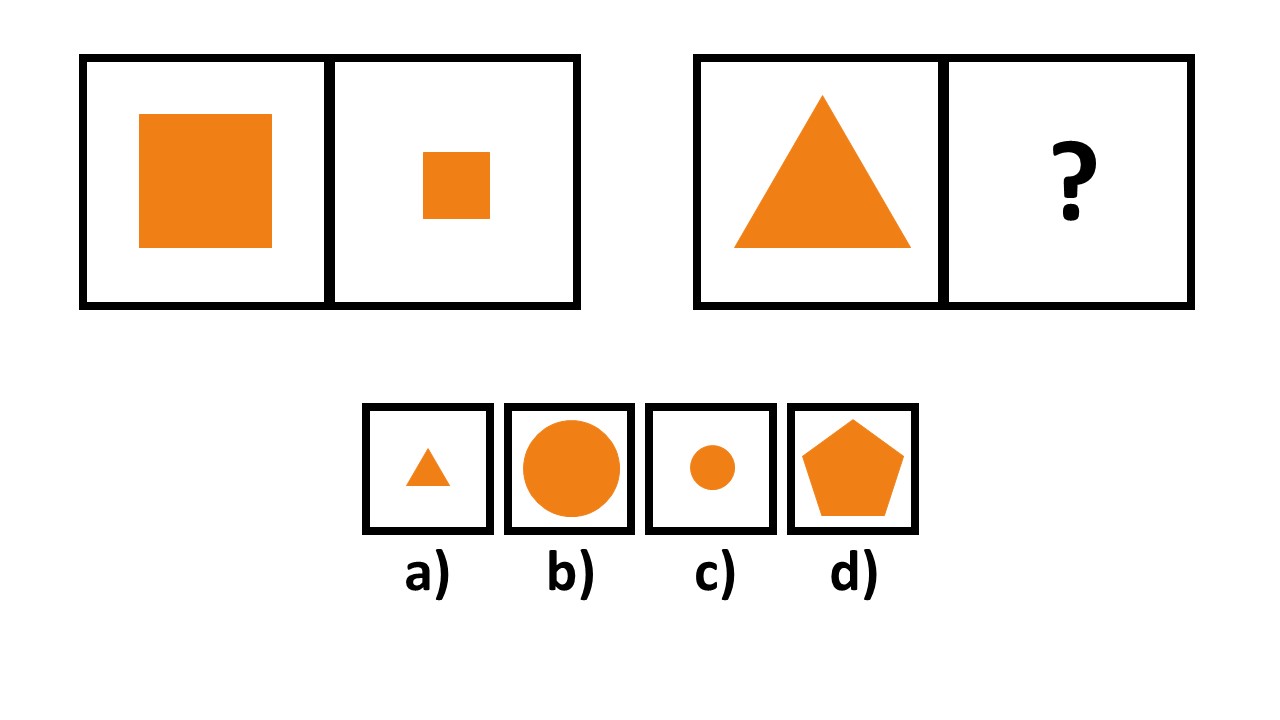 Below are three images that are of the same group. Please identify the group and what makes it a group. 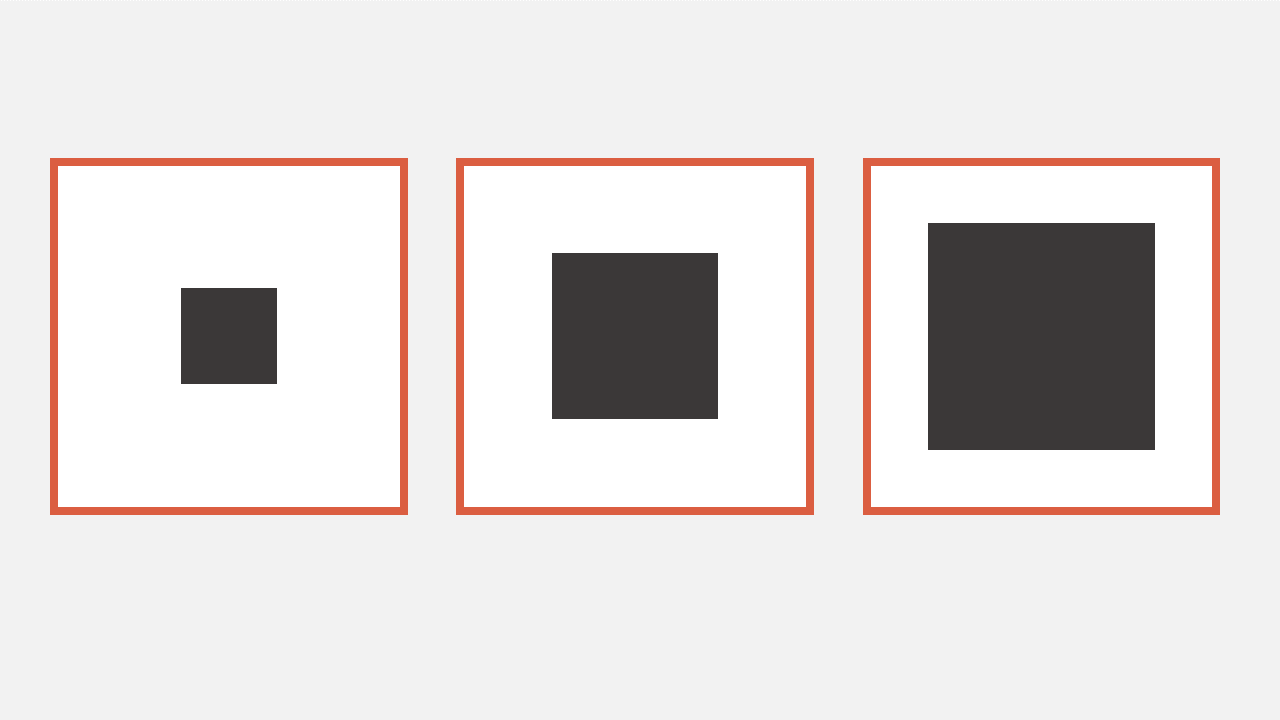 There are three images below. Identify the group and what makes it a group. 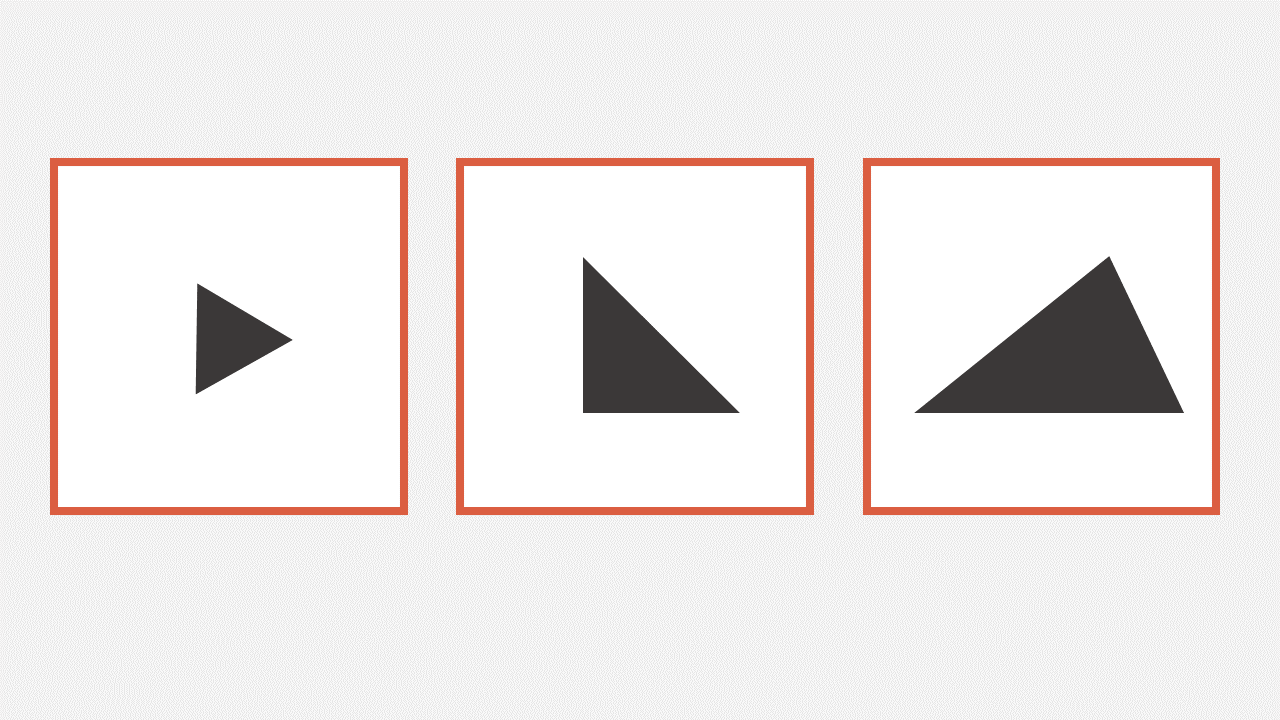 Students are given a piece of paper that is folded with holes punched in it. They then need to discern what the paper will look like when it is unfolded. 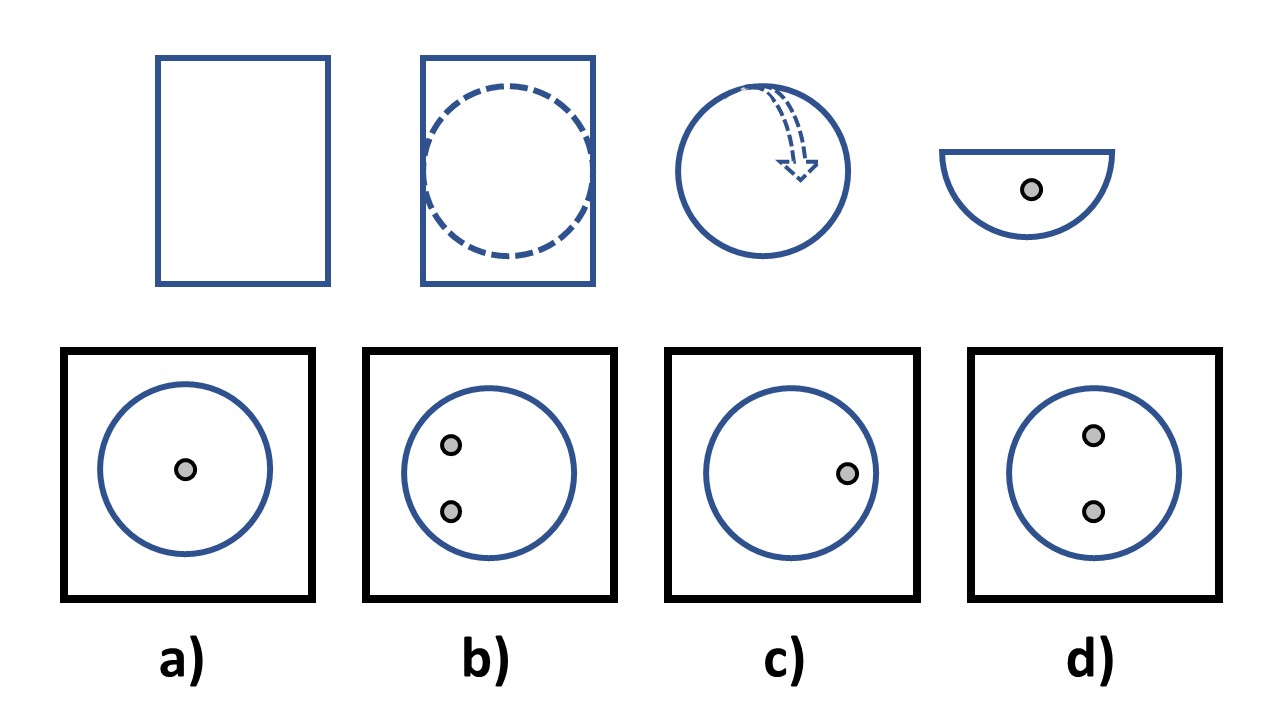 With any test it is important to understand how it is scored. There are a few important things to note about how the CCAT 7 is scored.

How to Pass the CCAT Grade 1

Students ready to take the Grade 1 test are not prepared to undertake formal study. There are other ways that they can prepare to do the best they can:

Writing a few practice tests can help your child understand what they will be dealing with in the real test and will hopefully help ease any anxiety they may be feeling. They should also give you a feeling of where any weaknesses may lie and areas that could use some help.

A lot of anxiety can be eased by knowing what to expect. Go over the test with your child and explain how many questions there are, what type of questions there will be, how long they have for the test, when they will find out their results and why they are sitting the test.

The more you have your child read, and the more you read to them, will help with spelling, vocabulary and word recognition. It can also help students to have a good grasp on understanding and responding to instructions.

Spelling games can help students with letter and word recognition, as well as simple spelling.

Both number games and working on some simple math can help with number recognition and improve mathematical work. Simple things like counting, adding and subtracting can all help in the test.

Because children this age are not ready to study for this type of test, some of the best help they can get is a lot of praise and encouragement from their parent or caregiver. The best boost you can give is to let them know they are doing a wonderful job.

Working on some games with pattern recognition can help your child recognize other patterns more easily and quickly when it comes to test time.

Children who get a good night’s sleep, as well as breakfast the next morning, will be likely to perform better than those who do not. Ensure that your student has all the tools they need (pencils, erasers) and that any forms have been filled out ahead of time. Knowing that everything is ready to go will help reduce any anxiety they may be feeling.

It is helpful to explain how the test works to your student, as well as taking them through the different batteries and subtests.

Although it may be difficult to practice for this type of test, and younger children are not yet ready for formal studying, there are several ways to help your child prepare, both academically and personally.

Helping your child be as comfortable and prepared as they can be will only help them do well now and in future tests.