What Is the CAT4 Level D Test?

The Cognitive Abilities Test, or CAT4, is an assessment taken by students aged 6 to 17 in the United Kingdom and Republic of Ireland.

It provides an accurate insight into a student’s learning capability and academic potential. The CAT4 is an important test, as the results enable teachers to understand how pupils learn and decide if additional support is needed.

There are 12 levels of the CAT4 test, with each level designed for a specific age group. The Level D test is generally taken by pupils aged between 10 and 12 – or Year 7 in the UK.

What Does the CAT4 Level D Test Contain?

The multiple-choice CAT4 consists of the four sections, each containing two short tests:

These eight short tests are categorised into three parts:

Understanding the types of questions that are asked in each part can help pupils feel at ease. Let's take a look at some example questions.

This battery covers verbal classification and verbal analogies in part two of the test. To help you prepare for the test, here are a few CAT4 Level D sample questions.

Candidates are presented with three words. They must choose, from five possible options, the one word that shares the same meaning as the three words.

From the five options, choose the word that has the same meaning as these words below:

The verbal analogies section also focuses on the meaning of words. It measures pupils’ ability to select a word based on its relationship with other words.

Below is to above as vertical is to ?

a) Up
b) Down
c) Horizontal
d) Diagonal

This section tests candidates on number analogies and number series.

Number analogies questions – which sit in part two of the test – are similar to the format of verbal analogy questions. They require pupils to determine the relationship between numbers in the same way they do for words.

They ask you to fill in the missing gap.

In this part, you will be given the value of A, B and C.

The key to answering number analogies questions is to follow these steps. First, look at the numbers of A and B.

Essentially, this part of the question has been answered for you, enabling you to gather information such as sums, squares and the relationship between the pair of numbers. You can use this information of rules, relations and formulas to solve the rest of the question.

In the example below, you need to figure out which of the five options share the same connection as 4 and 14.

In the number series part of the CAT4 Level D exam, pupils are presented with a series of numbers that have a certain progression rule.

For this section, the student must identify the rule and choose the next number in the sequence out of five possible answers.

Look at this series of numbers:

What is the next number in the sequence? 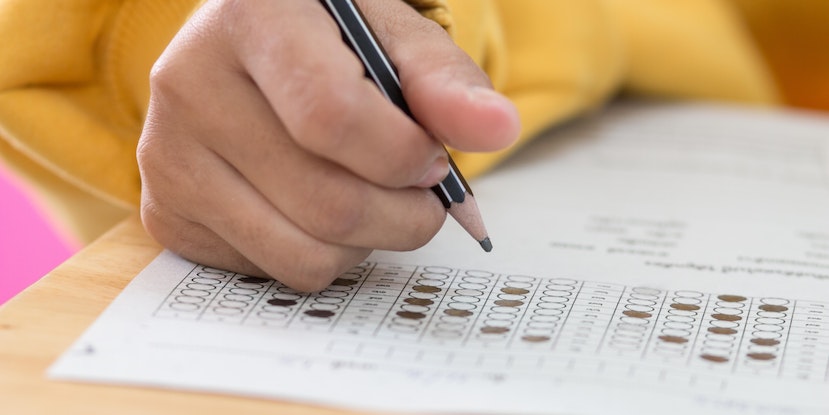 How to Pass the CAT4 Level D Test

This area tests students’ ability to reason with material that is non-verbal, rather than words or numbers. This section includes questions on figure classification and figure matrices, which feature in part one of the CAT4 Level D assessment.

Figure classification questions present pupils with three shapes that share a characteristic or conceptual link. Candidates are asked to choose one of five answers that describes what the shapes have in common. 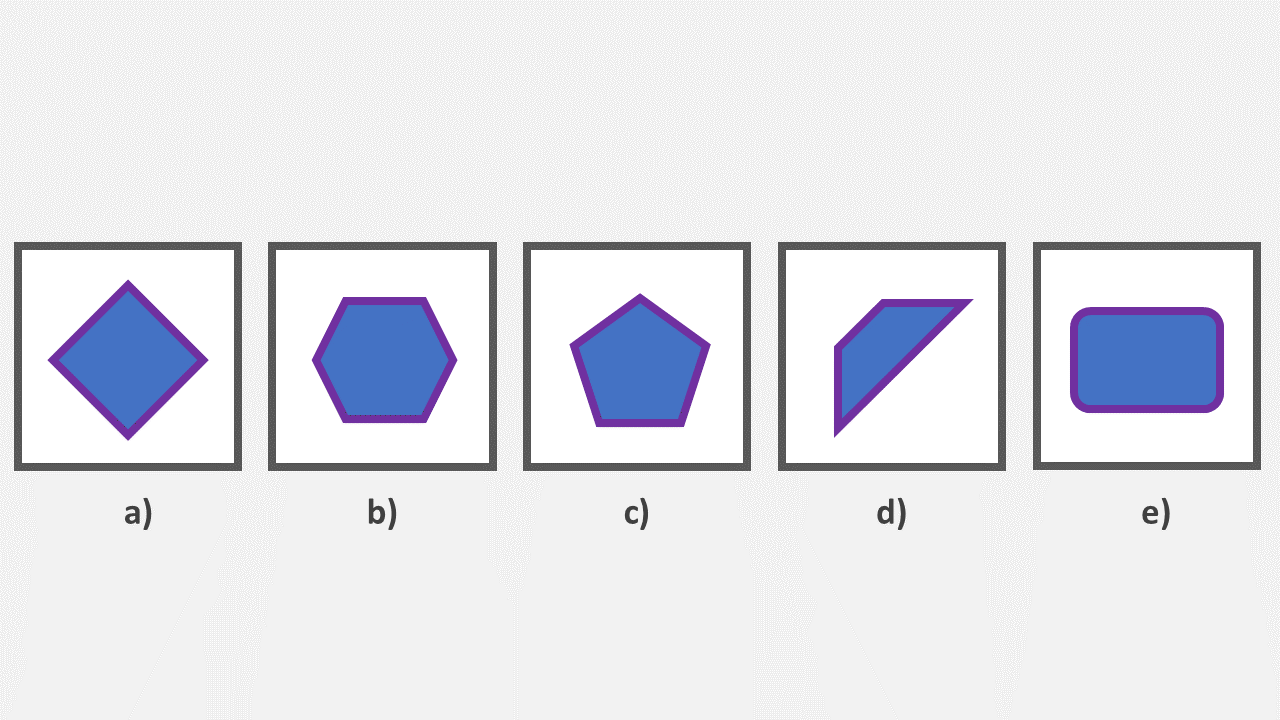 Choose the figure that is the odd one out.

The figure matrices part of this section will present a matrix of four boxes. The two top boxes and first bottom box contain a shape, leaving the fourth box empty.

Pupils are asked to recognize the connection between the two top boxes and apply this logic to the bottom row to fill the fourth box.

The below matrix features three shapes. Which of these shapes can fill the missing fourth space? 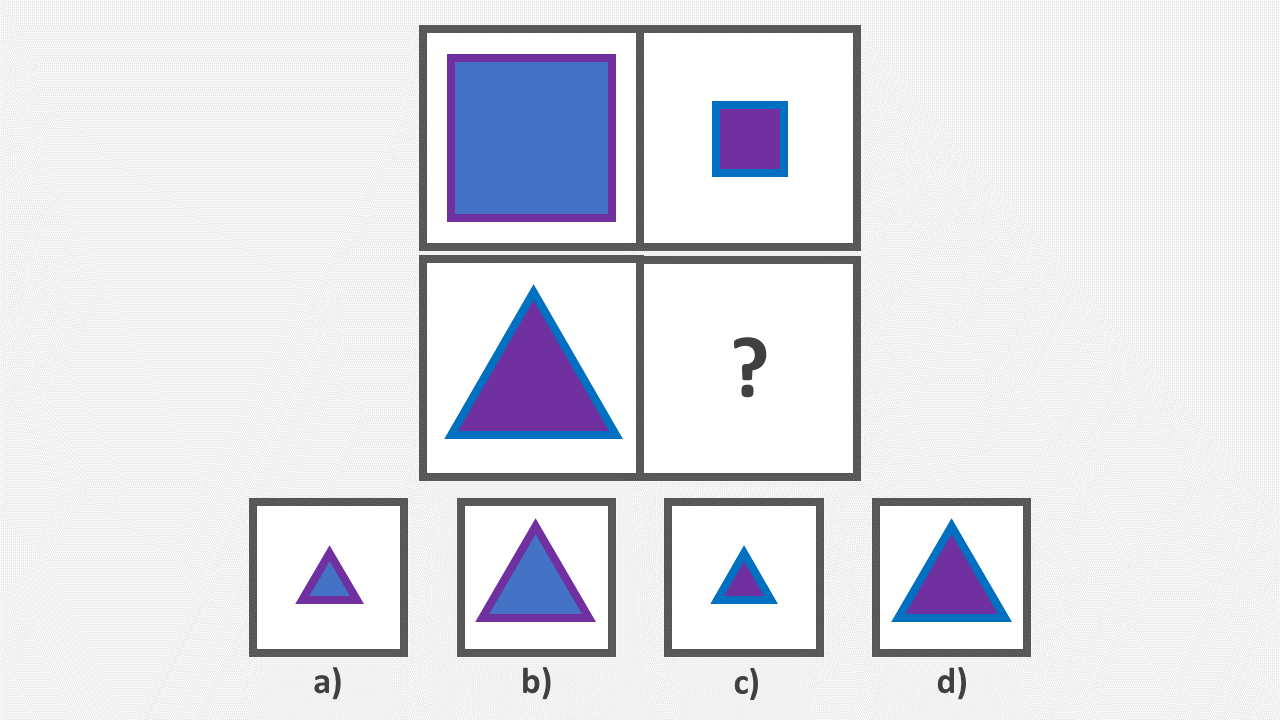 The two batteries of spatial ability – figure analysis and figure recognition – are included in part three of the CAT4 Level 4 assessment. These questions measure a pupil’s ability to hold and manipulate an image in their mind.

Figure analysis questions show pictures of pieces of paper that have been folded several times and punched with holes.

The five answer choices show unfolded papers that have been punched with holes. Pupils are asked to determine which of the five choices is the same as the folded paper in the picture.

Looking at the folded paper below, choose which option represents how the hole-punched paper would look once unfolded.

The arrow on the unfolded sheet shows the direction that the paper was folded.

The grey holes represent the punches in the paper. 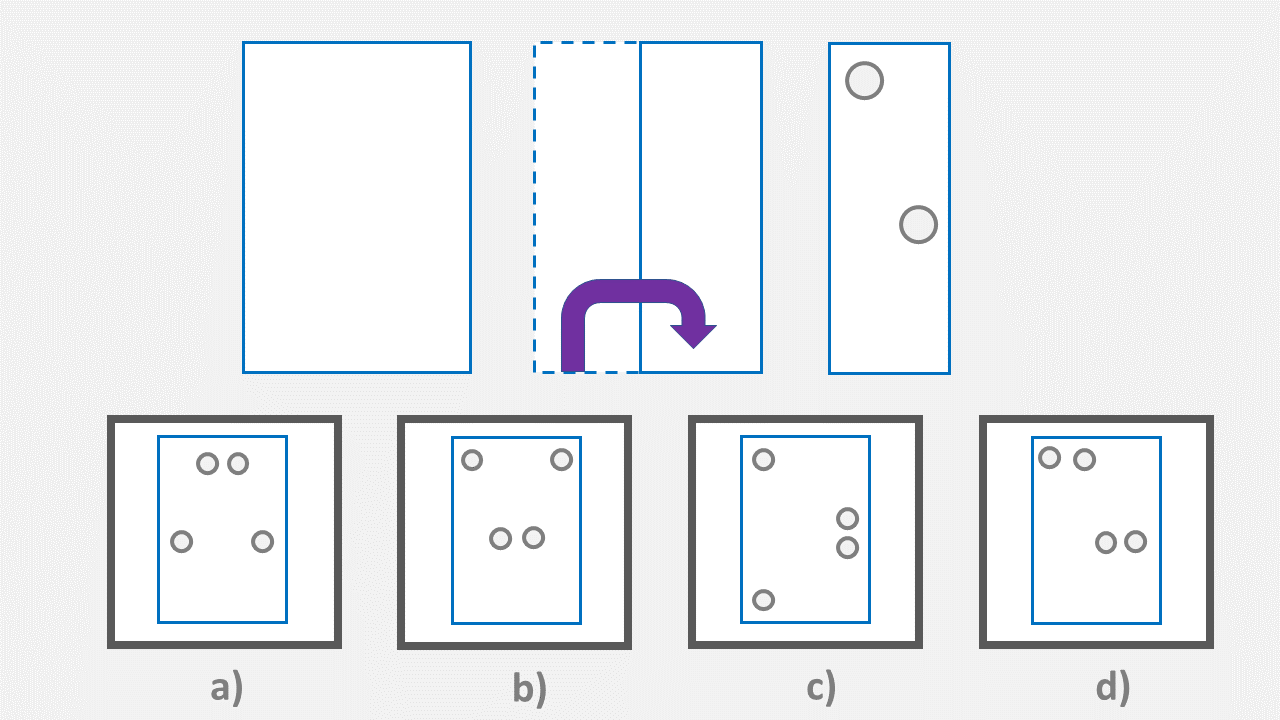 The second part of the spatial ability battery is figure recognition. In this section, pupils are given a target shape that is hidden in bigger pictures of multiple shapes.

1. Below is your target shape. Which of the following five options contains this shape? 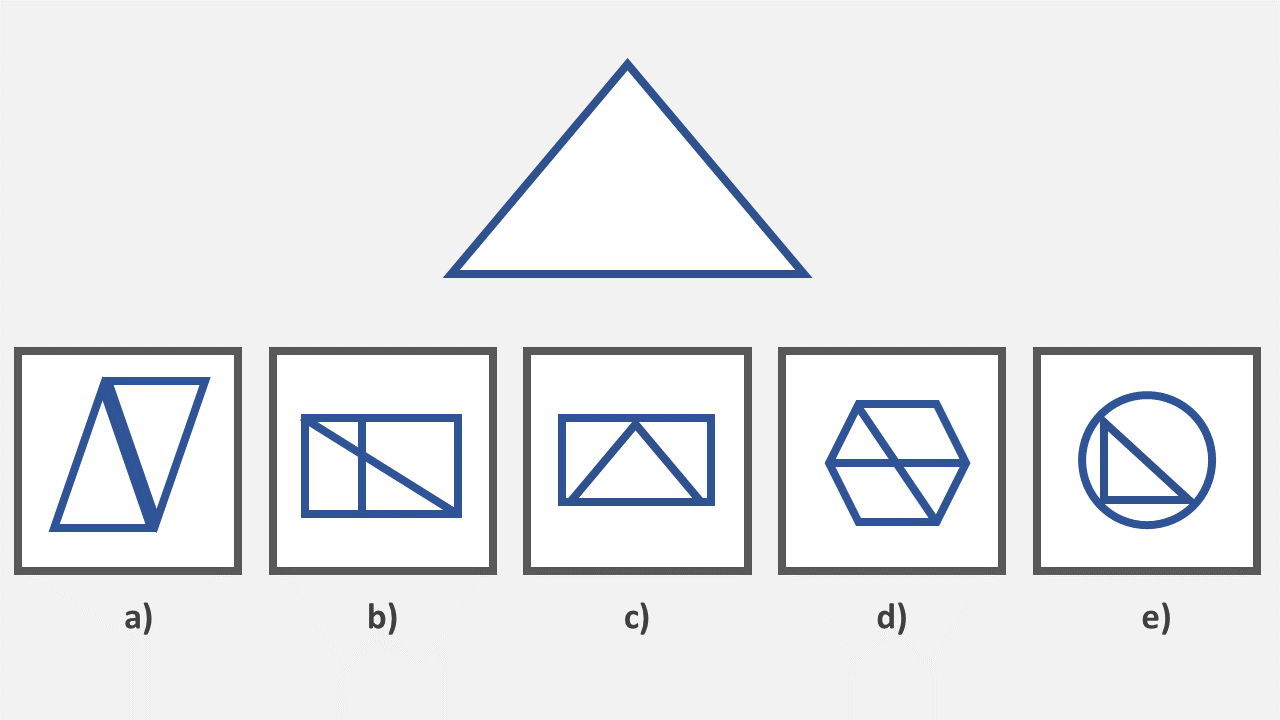 How Is the CAT4 Scored?

After taking the CAT4 Level D test, a pupil’s score is initially calculated as a raw score made up of the number of questions correctly answered.

Results are then interpreted in comparison with a national percentile score relating to children of a similar age and sitting the same CAT4 Level D test.

The analysis of raw scores plus the pupils' age results in a series of ‘normative scores’. Three types of normative score are provided to interpret pupils’ CAT4 performance. These variations are:

How to Pass the CAT4 Level D

To familiarize your child with the format of the test, you can find CAT4 Level D tests online that should alleviate nerves.

Alongside practice CAT4 Level D tests, you can encourage logical and lateral thinking by incorporating fun activities into your child’s routine.

Here are some of our top tips for helping your child prepare for CAT4 Level D:

Step 1. Have a New Word of the Day Every Day

Encouraging your child to broaden their vocabulary can help strengthen their verbal reasoning. How about setting your child a challenge to go and find the meaning of a word by the end of the day?

As the task gets more familiar, you can urge them to also research synonyms and antonyms to increase their understanding of word relationships.

The best way to learn is through games. Set up a Scrabble board and let your child learn new words with some help from their imagination.

Giving them a reward for words over six letters could encourage them to begin looking out for more complex vocabulary at home and school.

Jigsaws are great fun for all the family, as they allow you to assemble small pieces to see the bigger picture.

Practicing these puzzles with your child can strengthen their ability to spot missing elements quickly and accurately, a skill that will be very useful for the non-verbal reasoning part of the CAT4.

Give your child an insight into this classic game and show them how to become a Tetris champion, all the while helping them identify shapes of various sizes and orientations.

Being able to manipulate shapes is a crucial skill for the spatial ability section of the assessment.

Sleep is where all of this new knowledge is consolidated in your child’s brain, so ensure they are getting around 10 hours of sleep each night.

This is a big age, and the test can be intimidating, particularly if your child is starting a new school, meeting new friends.

Try to not emphasize the examination element of the CAT4. By familiarizing your child with the question sections through fun games and activities, you can help them shine and pass the CAT4 Level D assessment with flying colours.