What Is an IQ Test for Kids?

The IQ test result reflects the test-takers performance during the test, relative to other test-takers within their age group.

IQ tests can be administered as individualized tests or group sessions.

They are also available as computerized tests; however, these should be used with caution to ensure they meet the needs of the child.

Individualized IQ tests are the most time-consuming type of IQ test to run and interpret; however, they offer the most comprehensive overview of a person's general aptitude.

It is important that they are administered by a licensed psychologist or psychometrician.

If you wish for your child to be assessed, you should liaise with an educational psychologist so that they can oversee an individualized test.

In an IQ test for kids, children are required to answer a series of questions administered to establish a relative measure of their intellectual ability.

Kids IQ tests can be used to find out whether a child's academic weaknesses are linked to a cognitive difficulty. This is why they can be a helpful tool in the diagnosis of specific learning disabilities.

If your child feels bored or unchallenged at school, obtaining evidence of their learning ability may prove useful when contacting the school to discuss this.

An IQ score is also useful when your child is applying for an educational opportunity that requires evidence of their aptitude for learning or level of intelligence.

Choosing an IQ Test for Kids

A wide range of different IQ tests for kids are available. If you are searching for an IQ test for your child, it is important to choose one that offers reliable results and is well-regarded.

Choosing a highly rated IQ test for kids will help to ensure that you receive the most useful results.

The WISC-V test is the most popular IQ test for children aged between six and 16 years.

The Factor Scores can be used to evaluate a child's mental abilities and overall learning style.

First used in 1905, the initial version of the test contained 30 questions, which became more difficult as the test-taker progressed through the questions.

Test-takers were monitored by specialists, with test supervisors asking questions until the candidate failed to answer one.

Within three years, specialists had collected sufficient data to determine the average intelligence levels for all age groups of children, therefore, defining the concept of 'mental age.'

A child's mental age relates to a specific point on an average score table, which comprises average mental ages in line with estimated IQ scores.

When calculating the specific point, the results from the intelligence test are taken into consideration.

For example, a 10-year-old child's score on the test gives them a mental age of ten years old.

This means that they are of average intelligence when compared with their peer group.

This test is suitable for anyone aged between two and adulthood.

This test is suitable for children aged 10 and a half years and above.

If you wish to find out the IQ score of a younger child, you will need to have them assessed by an educational psychologist.

If a younger child scores in the top 2%, they can then apply to take the supervised IQ test via the 'Prior Evidence' route.

The first section assesses comprehension through the use of written text. In contrast, the second diagrammatic section uses non-verbal questions only.

This helps remove possible disadvantages for test-takers with language-processing difficulties or those using English as an additional language.

The Woodcock-Johnson IV Tests of Achievement

Suitable for anyone over the age of two, this set of tests was developed in the late 1970s.

The Woodcock-Johnson tests are a popular choice for identifying children who are eligible to join a gifted or advanced program of education, although they can also be used as part of the pathway for identifying learning difficulties.

Achieving a high score on this test can be an important factor in a child's academic success.

When compared with other standardized bodies of tests, the Woodcock Johnson tests cover the widest range of cognitive abilities.

Kids IQ tests can be a controversial subject; however, it is generally accepted that they can be useful in the identification of unusually gifted children and children with developmental delays.

They can also be used to highlight areas your child excels in and any that they require extra support with.

If you feel your child needs additional learning support or that they may fall into the category of 'gifted and talented,' you might choose to put them forward for an IQ test.

Be mindful that the score your child achieves in the IQ test only forms part of the full picture, namely the logical and verbal intelligence.

For this reason, an IQ test should not be used to define their overall potential.

An IQ test does not measure important qualities such as creativity, willingness to persevere or emotional intelligence. 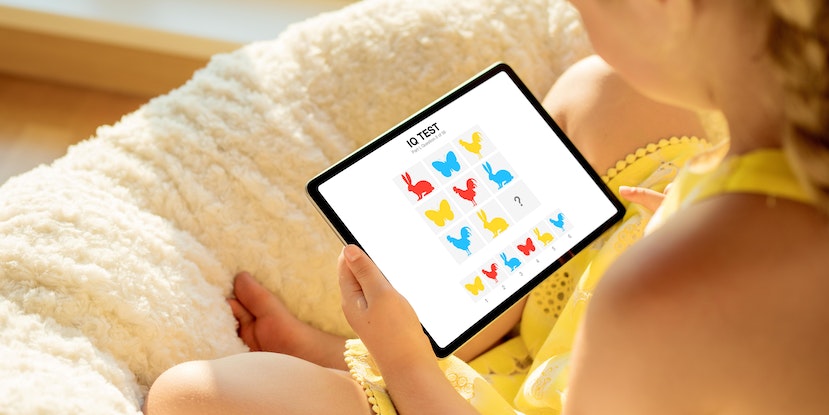 How to Prepare Kids for IQ Tests

If your child is preparing to sit an IQ test, it is important to provide the support they need to achieve the best possible score.

Step 1. Become Familiar With the Format

For very young children, it is important to help them to become familiar with the format of the test and the types of questions they will need to answer.

Research similar puzzles and games you can play together so that they feel comfortable and confident on the day of the test.

Explain that the IQ testing session will include many different games and puzzles, so they will probably find it fun and enjoyable.

Older children may benefit from completing mock or practice versions of the IQ test.

This will help them to familiarise with the test format.

Knowing what to expect will help to boost their confidence when it comes to the real test.

Read to or with your child, or encourage them to spend time reading alone.

This will help improve their language and comprehension skills, both of which are important when taking an IQ test.

Help your child to avoid feeling anxious about the test.

Reassure them that as long as they try their best, there is nothing to worry about.

Since the psychologist will simply want to understand how they approach problems, explain that it is acceptable to guess an answer if they are unsure.

Use age appropriate terminology to explain why they are being asked to take the test.

Whether it is being used to identify a potential developmental delay or because you believe your child may be gifted and talented, provide reassurance that their test score will not impact your relationship with them.

Step 5. Encourage a Healthy Lifestyle in All Areas

For example, a wholesome diet, regular exercise and plenty of sleep can all be linked to cognitive ability.

Depending on the age of your child, take the necessary steps to help them to achieve these lifestyle goals.

You might consider showing them how to create healthy meals, joining an exercise club together or introducing a no-screens rule during the hour before bedtime.

Children should aim to complete at least one hour of physical activity every day, whether this is playing a sport, going for a walk, running around with friends or playing at the park.

All types of physical activity can be positive for your child's cognitive ability.

Limit any recreational screen time to a maximum of two hours each day.

This covers the use of smartphones, video games, tablets, TVs and computers.

Too much screen time is widely considered to be detrimental to the developing brain.

Upon completion of the test, acknowledge your child's efforts and give them praise for their hard work.

Be mindful that some children need a little time to rest and recover following the test, particularly if they have found the process stressful or tiring.

Step 8. Ensure That Your Child Has a Good Night’s Rest Before the Test

Between nine and 11 hours is a good rule of thumb.

Prepare a balanced and healthy breakfast on the day of the test and ensure they wear comfortable clothing that they will be warm enough in.

Layers are a sensible choice as they can always add or remove one if the test room is too cool or too warm.

To help your child to avoid anxiety or nerves concerning the IQ testing process, you should spend time helping them to become familiar with the types and format of the questions they will be asked.

This will help to remove any worries they may have and reduce the likelihood of them being surprised by the questions on the day, thus allowing them to perform to the best of their ability.

If you decide to arrange an IQ test for your child, remember that the test results must never be viewed in isolation.

However, they can be a useful and easy-to-access tool for both parents and educators.

Whether you have concerns regarding a potential developmental delay, you are worried that your child may have a learning disability, or you believe that your child may be gifted and talented, IQ testing is a useful resource to research and consider using.

Finally, remember that intelligence can be displayed and measured in a variety of different ways.

This means that multiple approaches must always be used during assessments for developmental delays, learning difficulties or potential giftedness.

Equally, even though IQ tests can be used to identify cognitive strengths, a child's IQ test score will not highlight their wider educational needs, which program they are most suited to or whether they will be a good student for a particular learning pathway.