Aptitude Tests – Everything You Need to Know 2023

What Are Aptitude Tests?

Aptitude tests measure abilities such as:

Why Do Employers Use Aptitude Tests?

Sometimes using work history and an interview is just not enough when making a final selection for employment.

An aptitude test is an efficient way to test whether a candidate has enough experience to efficiently perform the duties of the job.

Aptitude tests allow unsuitable candidates to be easily filtered out of the application process.

Aptitude tests have a standard scoring system which makes it easier to compare candidates against each other.

The advantages of online aptitude testing include the immediate availability of results and the fact that the test can be taken at employment agency premises or even at home.

This makes online testing particularly suitable for initial screening, as it is cost-effective.

What to Expect When Taking an Aptitude Test

They are strictly timed and a typical test might allow 30 minutes for 30 or so questions.

You will usually find that there are more questions than you can complete in the time allowed and the aim is simply to give as many correct answers as you can.

Aptitude and ability tests can be classified as speed tests or power tests: 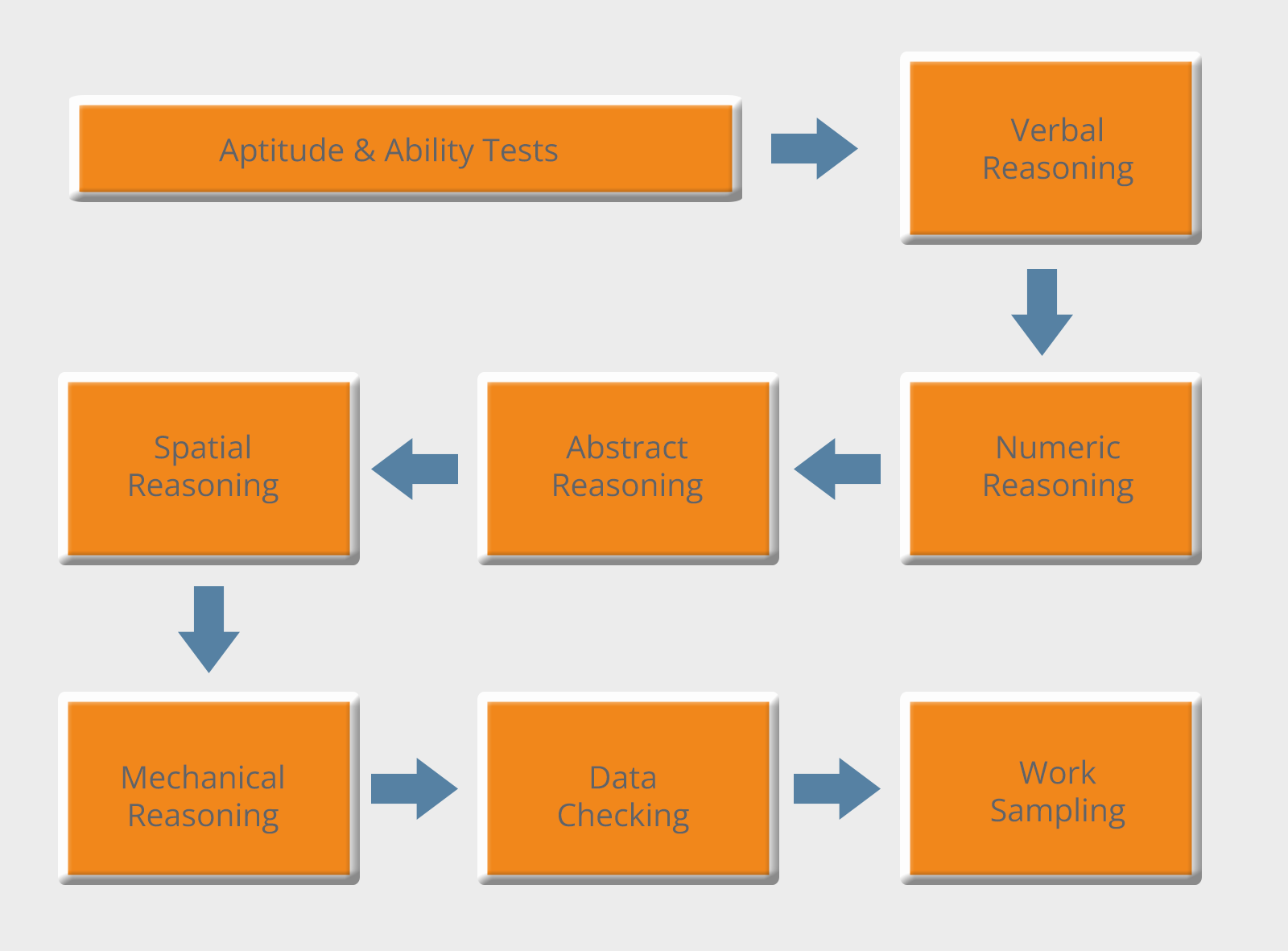 There are at least 5,000 aptitude and ability tests on the market. Some of them contain only one type of question (for example, verbal ability, numeric reasoning, etc.) while others are made up of different types of questions.

The main categories of aptitude test are:

These tests are usually scored on both speed and accuracy.

They are most often used when selecting candidates for administrative and clerical jobs where mistakes can have serious or expensive consequences.

This includes areas like financial services, legal services and healthcare.

Verbal reasoning aptitude tests are used to measure a person’s comprehension level, their ability to spell, use grammar correctly and understand terms.

They are particularly challenging for people who do not speak English natively.

These questions appear in most general aptitude tests because most jobs require you either to understand and make decisions based on verbal or written information or to pass this type of information to others.

Numerical reasoning aptitude tests are meant to measure the competency level of a person based on their understanding of numbers, number sequences, graphs, tables and calculations, such as mathematical equations.

In other words, this type of test is used to determine basic numeracy.

These tests are directly applicable to many administrative and clerical jobs but can also appear as a component of graduate and managerial tests.

In more complex data interpretation and numerical critical reasoning questions, blocks of information are provided that require manipulation and interpretation.

These questions appear in most general aptitude tests because employers usually want some indication of your ability to use numbers even if this is not a major part of the job.

Abstract reasoning and diagrammatic reasoning tests measure your ability to identify the underlying logic of a pattern and then determine the solution.

Abstract reasoning ability is believed to be the best indicator of fluid intelligence and your ability to learn new things quickly.

These tests are of particular value when selecting people for technical jobs which involve working with abstract ideas or concepts.

However, as they also provide the best measure of your general intellectual ability, you will usually find some questions of this type whichever particular tests you are given.

Spatial ability is required in production, technical and design jobs where plans and drawings are used; for example, engineering, architecture, surveying and design.

It is also important in some branches of science where the ability to envisage the interactions of three-dimensional components is essential.

No specialist knowledge is required to answer these questions, only an understanding of the principles.

Mechanical reasoning questions are used to select for a wide range of jobs including the military (Armed Services Vocational Aptitude Battery), police forces, fire services, as well as many craft, technical and engineering occupations.

Fault diagnosis tests are used to select technical personnel who need to be able to find and repair faults in electronic and mechanical systems.

As modern equipment of all types becomes more dependent on electronic control systems (and arguably more complex) the ability to approach problems logically to find the cause of the fault is increasingly important.

In data checking tests, you will usually be given two columns of data to check for consistency and you will be asked to mark up any differences.

This type of test is used to measure how quickly and accurately errors can be detected in data.

It is used to select candidates for clerical and data input jobs, particularly where accuracy is important; for example, accounting and banking.

In these tests, you will usually be given two columns of data to check for consistency and you will be asked to mark up any differences.

In-tray exercises are a sample of the work that you will be expected to do.

These types of tests can be very broad-ranging.

They may involve exercises using a spreadsheet if the job is administrative, or they may include giving a presentation.

WikiJob has a good run-down of in-tray exercises.

How Will Your Aptitude Test Be Scored?

Your test result will usually be a percentile score that is compared to others taking the test.

Usually, scores in the upper 25% of the range (the ‘top quartile') are deemed to have passed.

Ideally, your score will then be compared with the results of a control group that has taken the tests in the past.

This control group could consist of other graduates, current job holders or a sample of the population as a whole. Your reasoning skills can then be assessed in relation to this control group and judgments made about your ability.

More commonly, your scores will be compared to the other candidates who took the test at the same time. Whilst this does not represent best practice due to the small size of the sample, it is often what happens in real life.

How to Prepare to Take an Aptitude Test

Many people find themselves with only one or two days to prepare for aptitude tests.

This is enough time to prepare, provided that you are systematic.

Step 1. Find Out What Type of Aptitude Test You Are Taking

You may need to ask.

Most employers will give you a few practice questions to familiarise yourself with the test setup.

Sometimes, you can determine the provider of the test (the big names are SHL, Previsor, Cubiks, among others) and find tests geared for those providers, as well as more sample questions on their websites.

Step 2. Research the Types of Question You Will Face

Use the information on this website to get an idea of the different types of questions.

Try to speak to other candidates who’ve taken the test if you can.