Technical aptitude tests are designed to identify suitable candidates for technical roles within the emergency services and military as well as for craft and engineering jobs. 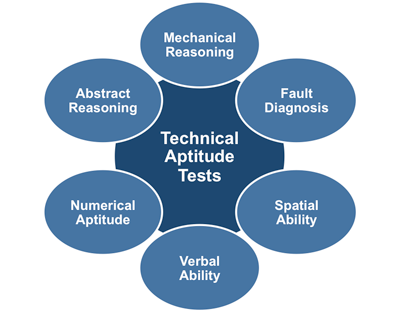 Technical aptitude test questions can be classified as follows:

Designed to assess your knowledge of physical and mechanical principles.

Mechanical reasoning tests are used to select for a wide range of technical occupations.

These questions are used to select personnel for technical roles where they need to be able to find and repair faults in electronic control systems.

The questions in fault diagnosistests appear rather abstract and require pure logic to solve.

This is because when a fault develops in an electronically controlled system, there is often no physical clue as to the cause.

In the absence of such a clue, for example an obviously burned-out component, the only way to diagnose the problem is by a process of logical elimination.

This type of test is used extensively to select technical and maintenance personnel as well as to select for artificer (technical) roles within the armed forces where the ability to approach problems logically in order to find the cause of the fault is increasingly important.

Spatial ability can be defined as ‘The ability to interpret and make drawings, form mental images, and visualize movement or change in those images.’

These questions appear in most technical aptitude tests because employers usually want to know how well you can communicate.

These questions appear in most technical aptitude tests because employers usually want some indication of your ability to use numbers even if this is not a major part of the job.

Measures your ability to identify the underlying logic of a pattern and then determine the solution.

Because abstract reasoning ability is believed to be the best indicator of fluid intelligence and your ability to learn new things quickly these questions appear in most technical aptitude tests.

If you are taking a technical aptitude test as part of the selection process for the emergency services or the military then the questions you can expect will tend to concentrate on principles rather than on making calculations.

For example, you may be shown three diagrams of a lever and asked which one is the most efficient.

This is very different from craft and technical tests where you will usually be expected to make calculations.

If you are taking a technical aptitude test as part of the selection for a craft or apprenticeship job, then you may be asked some questions about tools and how they are used.

You should also expect some shop arithmetic questions. These questions approximate the type of reasoning and maths that are needed to estimate materials costs, etc.