To work as a New York police officer, you must pass the NYPD exam as part of the recruitment process.

However, passing the NYPD exam is only one element of eligibility to work as a police officer.

You must also be a US citizen and, within a month of beginning employment as a New York police officer, be resident in one of the following:

There are two main types of NYPD exam used in the recruitment of police officers.

The former is generally used in New York City and the latter in New York State. However, it is always recommended that you check which of these two exams you will be expected to take.

In this article, we will mainly discuss the NYPD Police Entrance Exam.

What to Expect on an NYPD Police Entrance Exam

The two NYPD exams vary in their format and sections, but both seek to assess whether you have the correct skills and personality to work effectively as a police officer.

Generally used for police officers who will work in New York City, the NYPD police online exam features multiple-choice questions that present you with scenarios you may encounter on the job.

The exam is two and a half hours and the pass score is 70%.

Take an NYPD Test with JobTestPrep

This section assesses how well you are able to memorize and accurately recall information.

You will be allowed to memorize a photograph for 10 minutes. After that time, the photograph will be removed and you will be asked a number of questions.

For instance, having studied a photograph of a New York City street, you might be asked the following:

This section assesses how well you can understand written information. You will be presented with a typical police scenario and then asked to answer a series of multipl-choice questions on that scenario.

Police officers Kent and Lowry are sent to investigate a burglary at Apt 3, 672 West Avenue. When they arrive, they discover that the door has been forced open. The tenant, Alison Kelly, states that she left to go to work that morning at 8:30 a.m. and returned home at 6:00 p.m. She tells the officers that a jewellery box and its contents is missing, in addition to an expensive ornament, and a brand new tablet.

Miss Kelly agrees to leave the apartment until the Evidence Collections Team has investigated her home. The officers escort her out of the apartment.

The officers then attempt to interview Miss Kelly’s immediate neighbours and other residents who live on the same floor – four in all, apartments 1, 2, 4 and 5.

The resident of Apt 1, Mr Jarvis, states he has been at work all day. He saw Miss Kelly walk down the stairs as he left his apartment for work. He saw nothing when he returned home at around 4:00 p.m., but he didn't pass Miss Kelly’s apartment to reach his own.

There is no answer at Apt 2.

The residents of Apt 4, a retired couple called Mr and Mrs Holmes, who live next door to Miss Kelly, state that they heard movement in Apt 3 around lunchtime but assumed it was Miss Kelly herself. They didn’t hear the door being forced open, but they had been watching the TV with the volume turned up loud.

The resident of Apt 5, a young woman called Miss Lane, states that when she left her apartment just before noon, two young men passed her on the stairs. She had never seen these men enter the building before. They were both white, in their early to mid-twenties, and dressed casually. One had a neck tattoo, but she didn’t notice the design.

The Evidence Collection Team arrives 30 minutes later and proceeds to take fingerprint samples. Officers Kent and Lowry start on the report for burglary.

According to the passage:

2. The items stolen from Apt 3 are a jewellery box and its contents, a brand new tablet, and what else? 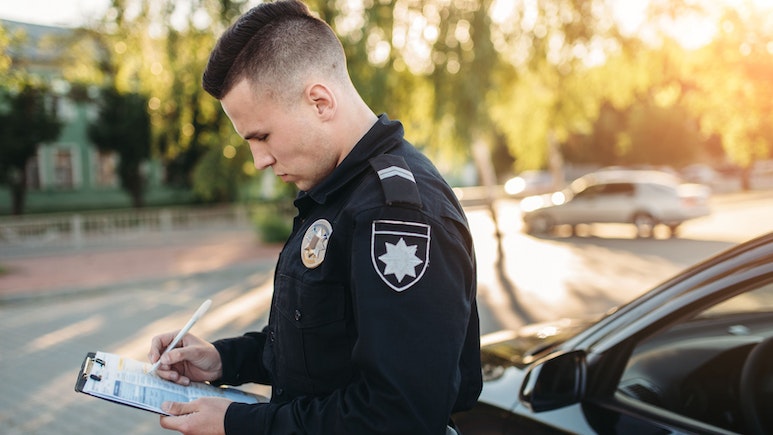 How to Prepare for the NYPD Exams

This section assesses how well you can express a clear message in writing.

You will be presented with a table of information and asked to choose which statement matches the data provided.

Officer Banner responds to a traffic accident. He obtains the following details at the scene:

1. When Officer Banner completes a report of the incident, which of the following best expresses the details in the most clear, accurate and complete manner?

Practice the NYPD test with JobTestPrep

This section assesses your spatial awareness – for instance, where you are in relation to another item or how well you can identify your location.

In this section, you will be presented with a map and a related direction, location or distance question.

A mugging victim states that the perpetrator ran down 13th Avenue, and then took the first left onto 52nd Avenue. The victim ran after them and saw the mugger turn right onto New Utrecht Avenue, where the victim was forced to stop because they were out of breath.

According to this information, in what direction was the perpetrator last seen heading?

The section assesses whether you can recognise and follow a sorting rule.

In a hostage situation where the perpetrators will not surrender voluntarily, you are told the correct procedure in order is to:

Question: Facing a hostage situation, having notified the Communications Division and confirmed the response of the patrol supervisor and Emergency Service Unit, which of the following should be your next step?

This section assesses how well you can picture something in your mind and identify items in different locations or after they have been moved or altered in some way.

You will be asked to answer questions about a diagram, map, geometric shape or some other type of graphic.

Inductive reasoning asks you to draw a conclusion or find a common factor or pattern after considering a selection of items such as images, witness statements or mathematical charts.

Which is likely to be the most accurate?

This section assesses how well you can draw logical conclusions from the information you encounter by applying a specific rule.

Questions in this section will often ask you to apply a state or NYC legal policy to a scenario and deduce what the correct course of action is.

This section assesses how well you notice and foresee problems. Can you tell when something is wrong or predict that something may go wrong?

Problem sensitivity generally involves drawing a conclusion from a variety of information sources.

For instance, questions in this section may ask you to assess the volatility of a situation and how best to handle the people involved.

This section assesses your mathematical ability at a generally basic math level.

Police Officer Pollock arrests Jill Hedge for burglary. The currency in the table above is found in Ms Hedge’s possession at the time of her arrest.

Which one of the following formulas should Officer Pollock use to calculate the total amount?

How to Prepare for an NYPD Police Entrance Exam

The NYPD Police Entrance Exam is considered to be a difficult exam to pass, so preparation in the run-up to the day is key.

Prepare for the NYPD Exam with JobTestPrep

Set aside a regular portion of time when you will study for the NYPD Police Entrance Exam.

Your study plan could include:

Mark it in your diary and keep to it.

The main benefit of using practice papers is to familiarise yourself with the format of the questions.

You can source practice papers from:

The more practice papers and sample questions you take, the easier it will be to identify your strong and weak areas.

Another benefit of using practice papers is being able to time your practice runs.

The time limit for the NYPD exam is two and a half hours. Use that as a guide to work out how long you can spend on each section.

Timed practice runs will also demonstrate how long each type of question might take.

Brush up your memorization skills by using memory games.

From tried-and-tested manual exercises, like trying to remember long digits or items on a shelf, to memory game books or apps and websites like Lumosity and CogniFit Brain Training, there are all manner of things you can do to improve your memory.

You will be expected to use math skills in the exam, so take this time to improve your math and problem-solving abilities.

You may still have educational resources from your college days to look back over.

You will only be expected to take the NYPD entry exam as part of our initial application process.

However, there are other assessments that you will be expected to take throughout your career as a police officer.

To pass the NYPD assessment, you will need a score of 70% or above.

The NYPD written exam is one of the first things that you will do as part of your application process.

It is usually required to be completed before physical tests or other forms of assessment.

Yes, the NYPD entry exam is considered to be difficult. This is because it looks at a wide variety of skills and abilities which are essential for your career as an officer.

Proper preparation and practice tests will help you do well.

The NYPD entrance exam is typically made up of 85 questions which are designed to assess nine different cognitive abilities. The test should be completed within two and a half hours.

Most candidates will be allowed to retake the NYPD entrance exam if they fail it. There may be a waiting time required between attempts. This is usually six months.

It is important to be as prepared as possible ahead of the NYPD entrance exam.

There are several courses and practice papers which you can consider. These will help to familiarise you with any areas which you find difficult as well as enable you to see the style of questions before the main exam. They can also be useful for building confidence.

You should also take time to practice math and memory problems to build your knowledge in these areas.

Many people find that taking the time to develop a study plan can also help them to manage their time better and balance the different areas which need to be studied for.

The NYPD Police Entrance Exam is generally acknowledged to be a difficult exam to pass, and there is high competition to work as a New York police officer.

However, if this is your career of choice, your best option is to prepare as fully as you can for the exam to provide yourself with the best chance possible of success.